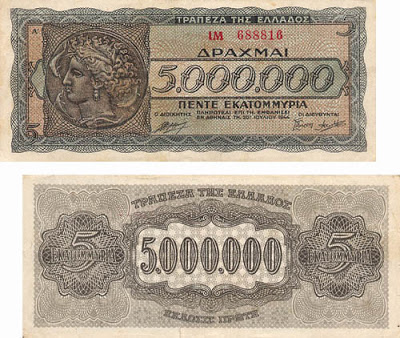 This last weekend, I visited with a friend in McClean, Virginia (suburb of Washington D. C.). He collects Greek currency. As a fellow banknote collector, though my tastes run to historical Indochinese banknotes, I took some interest in his deep and very interesting collection. At the end of the Second World War, Greek people had chests containing billions of drachma as typified by the five million drachma note, above. At the end of that particular hyperinflationary period, the Greek Government did what issuers of paper money do at times. They came out with “the new drachma”.  This means that they came out with a new issue of paper money. At that time they pegged their exchange rate at 50,000,000,000 old drachma to 1 new drachma. 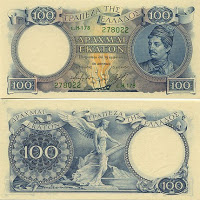 In November 1944, after Greece was liberated from Germany, the government issued notes of 1, 5, 10 and 20 drachmae, with the Bank of Greece issuing 50-, 100-, 500-, 1000-, 5000-, and 10,000-drachma notes. This drachma also suffered from high inflation. The government later issued 100-, 500-, and 1000-drachma notes, and the Bank of Greece issued 20,000-and 50,000-drachma notes.
In 1953, in an effort to halt inflation, Greece joined the Bretton Woods system. In 1954 the drachma was revalued (AGAIN) at a rate of 1000 to 1. The new currency was pegged at 30 drachmae = 1 United States dollar. In 1973, the Bretton Woods System was abolished; over the next 25 years the official exchange rate gradually declined, reaching 400 drachmae to 1 U. S. dollar. On January 1, 2002, the Greek drachma was officially replaced as the circulating currency by the Euro.
Today the European Union is considering sending Greece back to its own currency. Maybe we’ll see a fourth issue of drachma? I hope that they make BIG banknotes so that people will be able to burn them to keep warm… 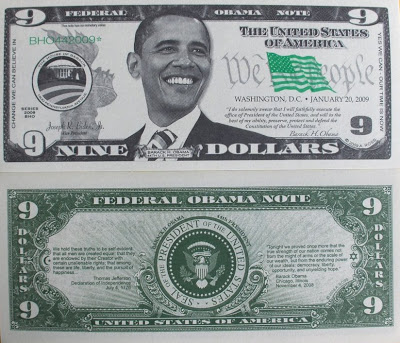 The lesson here is that sometimes paper money is ONLY worth the paper it’s printed on. I hope we’re never in a position to exchange “old dollars” for “new dollars” (with Obama’s picture on the $9 and Biden’s likeness on the $13).