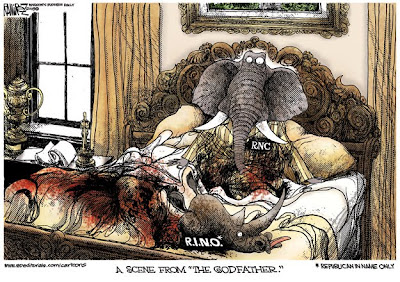 The photo right of Barack Hussein Obama, the senile Joe Biden and famous RINO, Senator Arlen Specter (D former R-PA) leads me to call for term limits for the Senate as well as those proposed for the House of Representatives.  I’m not suggesting that it’s a bad idea for Specter to fly his true colors. At least he’s proudly proclaiming himself to be a utopian socialist who has no problem financially ruining the United States of America for the sake of internationalism. He has no problem at all advocating the joys of having a group like ACORN managing hundreds of millions of dollars worth of federal loans to people who are likely to default on those loans because they’re UNQUALIFIED for them (call me a racist if you must – but it’s not about race, it’s about financial qualification).

The heart of the matter is the growing number of independent voters who are fed up with both parties and who are increasingly conservative to the extent that “Constitutionalism” is conservative. Some of us would argue that being in favor of the rule of law under the Constitution of the United States is and should be viewed as mainstream and anyone who opposes the rule of law would be considered a ‘fringe element’.

Independent voters will decide many if not all of 2010 elections.

Sorry Party faithful (both Parties). Politicians will be held increasingly accountable for their votes. You can not only talk the talk, the town hall meetings are indicative of a populace who wants you to walk the walk. The free ride is coming to an end, thanks to the utopian socialist, Barack Hussein Obama, whose stated goal is destruction of America as presently constituted and “rearranging” the social structure with coercion.

The coercion** of the American people has begun through government ownership of the domestic auto industry, the banking industry, the insurance industry and now the attempt to take over the healthcare industry. Government ownership means government power to compel Americans to do, or to abstain from doing, something by depriving them of the exercise of his their will, particularly by use or threat of financial or moral force.

** In many states of the United States, statutes declare a person guilty of a misdemeanor if he, by violence or injury to another’s person, family, or property, or by depriving him of his clothing or any tool or implement, or by intimidating him with threat of force, compels that other to perform some act that the other is not legally bound to perform. Coercion may involve other crimes, such as assault. In the law of contracts, the use of unfair persuasion to procure an agreement is known as duress; such a contract is void unless later ratified.