Is Nancy Pelosi out of touch with Reality? 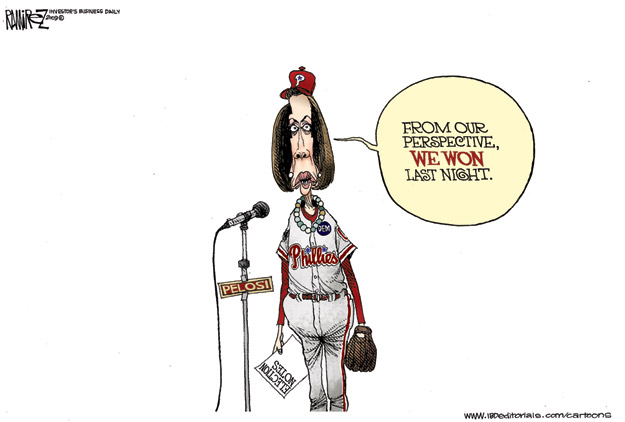 In a comment on a previous blog, my friend, also known as WoFat, commented on the air some of the Congress must breathe and how it must be different from that which the rest of us suck in and push out. Nowhere is that more extreme than with Speaker of the House of Representatives, Nancy D’Alesandro Pelosi (D-CA). Personally, she’s one of if not –the- wealthiest in Congress.

She’s used to privilege since her father was a US Congressman too. In an act of supreme hubris, Rep. Pelosi commutes between San Francisco, California and Washington, DC on a VC-32A. That’s a Boeing 757-200 aircraft that operates under the call sign, “Air Force Two”.

So it’s not even the slightest bit ironic that she exempted herself from the same healthcare that she is trying to push down the throat of the American taxpayer. She’s an elite woman who would never stand in line for healthcare with the proles. No, Rep. Pelosi feels that what’s good for us, isn’t necessarily good for her.

Rep. Pelosi is shrill in her pleas for a government-run health insurance scheme to “keep the insurance companies honest.” But Blue Cross/Blue Shield warns of dire consequences:

• The federal government “will underpay providers — even if negotiated rates are initially used — creating major access issues, including long waits for services with some providers closing their doors …”

• Any “government-run plan will use its built-in advantages — no matter how it is initially structured — to take over the market” via “price-setting based on Medicare” or through the use of “existing government programs as leverage for negotiations.”

If it’s worth turning the private health care industry upside down like that, this must be a solid gold system Congress is establishing. But Rep. Pelosi doesn’t want it for herself? She’d rather keep the “Cadillac” coverage she has enjoyed for years, with its hundreds of private insurance options and heavily taxpayer-subsidized premiums. Pelosi’s hypocrisy typifies the arrogance of professional politicians who like to dictate how others live, while shielding themselves from their own laws’ consequences.

Nancy Pelosi is a role model for all Democrats. I’m sure they’re all so proud of her.