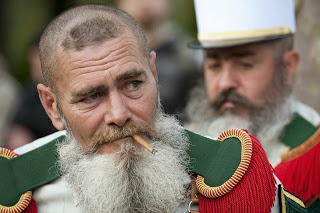 Since this is national beard month, I expect that it would be wrong of me not to have a blog entry that deals with them.

I’ve chosen to honor the Pionniers of la Legion Etrangere, all of whom wear beards as a matter of traditional pride. There is a pionnier platoon that does the ceremonial marching at the head of any particular French Foreign Legion regiment. They don the traditional symbols of Napoleonic sappers, wearing aprons and carrying axes – and marching at the 88-step per minute marching speed of the Legion. (the rest of the French Army marches at 106 steps per minute) The FFL is always the last unit to march in any given parade. The Pionniers march at the head of the Legion in a place of honor. During World War 1, so many of the FFL engineers died in combat that they were allowed to wear beards. The practice became tradition. 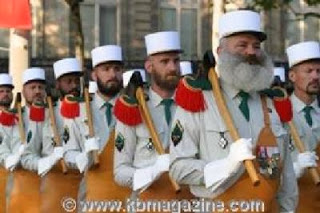 Those of you who may have been to my home will recall that there is a lot of French Foreign Legion stuff in my living room. All gifts from legionnaires who knew/know me and displayed with honor along with other gifts from other places.* Even though I served with the US Navy, I had a title (unofficial) bestowed by 2 REP at Calvi, Corsica of “Colonel Lambert” (pronounced the way the French pronounce Lambert). I mentioned to friends in the Legion that I am not French. They replied, “neither are we”. Legionnaires swear an oath of loyalty to the Legion, not to France.

* If it’s all out at the same time, my home looks a bit like the Imperial War Museum.