The Food of Racists 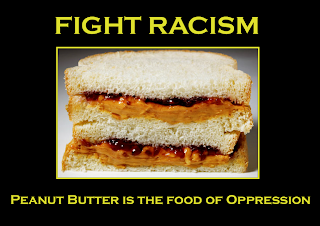 “What about Somali or Hispanic students, who might not eat sandwiches?” says Gutierrez, principal at Harvey Scott K-8 School, a diverse school of 500 students in Northeast Portland’s Cully neighborhood.

“Another way would be to say: ‘Americans eat peanut butter and jelly, do you have anything like that?’ Let them tell you. Maybe they eat torta. Or pita.”

All this time I thought that I liked PB & J sandwiches (better on toast) because they’re delicious. Now I’m exposed as a racist — but they still taste good.

However, and for the record, there never was a time (as a kid or now) that I wouldn’t be willing to swap a PB & J sandwich for chicken and waffles or a delicious home made carnitas burrito. Does that redeem my racist love for PB &J?

There are foods that I won’t eat to be racially correct (this is a partial list):

Chicken Feet – Chinese people love them. Me, not so much.

Fried Spam – The staple of the Philippines, Hawaii and points east — no. Not for me.

Sambal Rat – Indonesia says yes. I say no. Yes, I’ve tried it. I still say no.

Capybara – I’ve eaten them in Mexico, they’re a Brazilian delicacy, but they make me sick. Never again.

Racially sensitive food that I will eat to be racially correct (this is a partial list):

Durian – If you’ve never been “East” you won’t know the fruit. It’s illegal to import them into the US. They taste a bit like onions. It’s an acquired taste but I give them a thumbs-up. The Malaysians love them.

Dog – Korean’s love them and I’ve eaten dog in Korea. It’s not bad the way that they BBQ them with garlic and spices. They prefer tender puppies, and I think that’s what I ate when over there.

Cat – Not a bad meal if you make sweet-and-sour cat. The Chinese love them to eat, not as pets.

Grits – Not being from the American South, this was not a food group for me when growing up. However I do like grits and am not shy about saying so. Both Black and White like grits in the South, but Asians (racists that they are), tend to reject this anchor of Southern cooking.