The Art of Listening (in warfare) 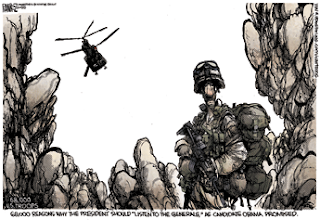 President Obama said the right thing when he ran for office. He said that he’d listen to his generals. The past eight years of post 9/11 war has created some of the best and brightest generals America has produced. Some great and insightful warriors have come to lead US troops and the military trusts them. The would-be commander-in-chief said he trusted them when he was spewing out campaign rhetoric. The truth is something else. And Barack Hussein Obama is trashing the slender thread of hope the military had in his leadership potential. At present, he (the President) is stalling in a war that he adopted and called “necessary” for the good of America and of the world.

The Pentagon consensus is that the window to win is closing and the opportunity will be lost soon. Instead of acting on the August recommendations of our commander in Afghanistan, Gen. Stanley McChrystal, to send 40,000 reinforcements, the administration is delaying that hard decision. In an eerie echo of the criticism anti-war Democrats made against South Vietnam before it was abandoned to the communists, White House Chief of Staff Rahm Emanuel said over the weekend that new troops would have to wait because of the electoral woes. (Investor’s Business Daily)

President Barack Hussein Obama seems unable to formulate a long term strategy to confront the threat that we face in Afghanistan and elsewhere. The criteria for doing that is well known to Generals Petreus and McChrystal, and it’s not new here:

If the problem is counter-insurgency in Afghanistan, as seems to be the case, we need to balance military and civilian efforts on the ground. This is something both General Petreus and McChrystal favor. I hold common cause with them as an insignificant blogger. The advice they provide their president is carefully considered and is sound. Getting the politician to pay attention to it – and keeping the military’s morale up while he stalls is a challenge.
The stall is a sop to the liberal community who don’t want us in Afghanistan at all. He may also be stalling until he actually receives his Nobel Peace Prize before committing 60,000 more combat troops to Afghanistan. I don’t know, but suspect his motives move along priorities other than what’s good for our soldiers in foreign fields who fight and die while the commander-in-chief continues to lie.