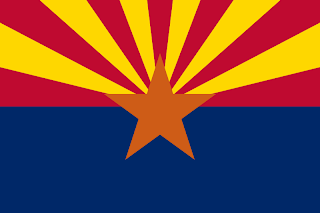 On Thursday, the Arizona House voted to make the state the third in the nation to allow people to carry concealed weapons without a permit. The legislation, approved by the House 36-19 without discussion, would make it legal for most U.S. citizens 21 or older to carry a concealed weapon in Arizona without the permit now required. Governor Jan Brewer is expected to sign the measure into law.

Arizona will join Alaska and Vermont in not requiring permits to carry concealed weapons. Forty-five other states require permits for hidden guns, and two states — Illinois and Wisconsin — prohibit them altogether.

Firearms restrictions only affect people who want to follow the rules because criminals will carry hidden guns regardless of the law.
Under the measure, Arizonans would still be subject to the background checks federal law requires when buying firearms from a store. People carrying a concealed weapon would be required to tell a police officer if asked, and the officer could temporarily take the weapon while communicating with the gun carrier.
Brewer, a Republican who took office in January 2009, is very supportive of citizen’s rights to own, bear and retain arms. Her predecessor, Democrat Janet Napolitano, vetoed several measures pushed by gun-rights supporters before resigning to run the U.S. Homeland Security Department.
On Monday, Brewer signed two bills loosening gun restrictions. One bill broadened the state’s current restrictions on local governments’ ability to regulate or tax guns and ammunition. The other bill declares that guns manufactured entirely in Arizona are exempt from federal oversight and are not subject to federal laws restricting the sale of firearms or requiring them to be registered.

(CNSNews.com) – A new reportpublished by MSNBC.com shows that more guns in the hands of law-abiding citizens results in fewer deaths from the use of firearms. [I never thought I’d see MSNBC put out a pro-firearm story no matter what the reality of the situation is.]

Alan M. Gottlieb, vice president of the Second Amendment Foundation (SAF), called the finding “further evidence that everything the gun prohibitionists have been claiming and predicted over the past two decades has been fundamentally fraudulent.”

EVERYWHERE concealed carrying of firearms has been legalized, crime dropped. Allowing honest people to arm themselves made criminals more wary when committing crime. Criminals will always be armed. Allowing citizens the same right merely levels the playing field.  We’re talking reality here, not how life should be in a perfect, utopian world.