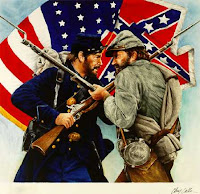 Though I have blogged on this issue before and have left comments on other people’s blog, perhaps it’s time to take the issue on again. My friend, The Black Widow (who is neither racially black nor a female) reminded me that the mainstream media/state-run media is stirring up trouble again. There is a link at the bottom of this post to the Black Widow’s Blog.
The War of Northern Aggression/Civil War/War Between the States/War of the Rebellion was known by many names. It came about because the industrial North and the agricultural South could not compromise on issues of Constitutionality. One of those issues was slavery of negroes in Southern States.
When the original colonies confederated formed the Articles of Confederation and later crafted a Constitution, there was nothing in either document which said that the states had to remain with the rest in perpetual union. Had that clause been included, there would have been no Constitution. Each State (northern or southern) required its own sovereignty over issues not specifically outlined in the Constitution (10th Amendment – part of the Bill of Rights). As a result, the Southern States felt legally justified in leaving the Union. Legally, I think they were on firm ground. There was nothing in the body of US Law that forbade it. The Constitution of the United States ALLOWED for slavery and for the apportionment of Congressional representation based on counting slaves for that purpose.
Before you scream that I am a racist, I’m only citing the law of the land.
There are MANY accounts of soldiers from the North asking soldiers from the South why they’re fighting. The typical response was, “because you are here.” With two exceptions (Antietam and Gettysburg), almost all of the battles were fought in Southern States. The tragedy of it all was that all of the dead in that war were AMERICANS.
The Southern States were more or less devastated by the War. Blacks slaves were set “free” with nowhere to go – except that many Northern States (particularly New York) made it plain that they didn’t want the newly freed slaves settling there. That’s history. It is a sad history, but it’s part of American history.
Today CNN and the state-run media in general are running pieces condemning people who live in Southern States from recognizing and remembering their history. That couldn’t be more wrong. It doesn’t matter how many of the Confederate Soldiers held slaves or whether the North was justified in their invasion of the Southern States. It’s part of history and any effort to nullify history means that we’re not learning from the lessons it teaches us. Half a million soldiers died in that war, each side feeling it had justice and God on its side. Time to learn, not burn books that disagree with our preconceived notions.
Today we have a socialist regime in power in Washington. They are trying to ram their brand of government down our throats to spite the Constitution. States are suing the Federal Government over ObamaCare. States are enacting laws which prohibit federal firearms laws holding sway in their states (a firearm and ammunition manufactured in a state are not held to be of federal concern under the interstate commerce clause of the Constitution) and for the first time, States can take Federal Government land under the doctrine of eminent domain.
The States are fighting back in the courts and in their own respective legislatures to provide the citizens of those states protection against the Socialist Federal Government. The US National (state-run) media is lashing out in any way it can against any issue of State’s Rights that it can — suggesting that any issue of State’s Rights is somehow racist. Fighting against a socialist regime through voting and through enacting laws to curb it’s power hungry grab to nationalize and socialize American Industry is in NO WAY racist. Race does not enter into it, and neither does gender.