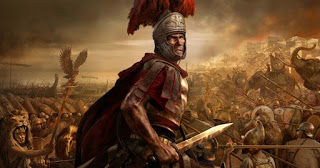 Facebook
Twitter
Pinterest
WhatsApp
Before it was Scotland, it was Britain. From the first to the fifth centuries, the land beyond Hadrian’s Wall (and Antonine’s Wall) was part of the Roman Empire. It’s remote location in the far western periphery meant that communications with the home office took time. As a result of that geographical situation, there were different Roman commanders who tried to arrange a BREXIT from Rome’s dominion.

During one of these events, in the late third century AD, Britain exited the Roman Empire for a period of around ten years. Because the separation lasted for so long, one can only ask whether it was the first BREXIT?
The Roman Empire in the third century was in a period of economic, political and social change, now known as the “Third Century Crisis” . The period saw intensified disturbances and incursions along its frontiers which drained military and economic resources. It was a period of inflation, coinage was devalued and the old elite order in Rome was being challenged, especially by the military. Since Julius Caesar’s coup d’état, ambitious members of the military saw the possibility of a gold laurel around their brows.

Against this backdrop was born the short-lived breakaway Gallic Empire (260-274AD). It was formed out of territories in modern Germany, France, Spain and Britain under the leadership of the usurper Postumus. But Postumus was murdered in 269AD and the Gallic Empire didn’t last much longer without him. But following the rise in the power and influence of Carausius in the 280ADs, Britain again broke away from the Roman Empire – and this time alone.

Carausius may have been born in coastal Gallia Belgica, an area which corresponds roughly with Belgium today. He became a military commander and was appointed by the Emperor Maximian to assemble a fleet to help with the problem of piracy in the North Sea.
The precise circumstances of his fall from favor with Emperor Maximian are lost to history but we do know that he ordered Carausius’ death. Historical sources say that to escape death, Carausius made a rather ambitious move – and declared himself emperor in Britain in 286AD. In reality, this is likely to have been a long and gradual process of gaining support and influence, aided by Britain’s remote position on the edge of the empire and its growing dissatisfaction with the workings of Rome. Carausius couldn’t have pulled this off without the support of subordinate commanders and influential citizens.
Carausius minted many coins for propaganda purposes, emphasising themes, such as local agriculture and wealth production, which would have been essential for Britain’s survival outside the Roman Empire. But Carausius’ position appears to have been fairly precarious and he was assassinated by his finance minister, Allectus, in 293AD who then also attempted to style himself emperor. (sic temper tiranus) Allectus was killed when Rome came calling to take the place back.
In 296AD Constantius Chlorus led the invasion and reconquered Britain, as “redditor lucis aeternae” (“restorer of the eternal light”) .
Growing discontent in Britain at the time contributed to the opportunism of Carausius, who perhaps successfully appealed to this disquiet. Using modern terms, Britain in the third century was an increasingly unequal society with large villas and townhouses – the grandiose and conspicuous homes of a tiny proportion of the population – appearing for the first time. Then, as now, it is possible that large numbers of people felt overlooked by the ruling “elite” and its links to a European power base. It is likely that convincing the military stationed in Britain was also an important factor.
The majority of the population in Britain are likely to have had fairly grim lives under Roman rule but whether their lives were better under Carausius seems unlikely and is difficult to pinpoint archaeologically. As a self-styled emperor, he would not have had any interest in the majority of the people of Britain.
The broader Third Century Crisis did result in some substantial changes to the organization of the empire, including a reduction in the size of provinces and an increase in bureaucracy. These changes were unsuccessful. Britain fell out of the empire for good in 410AD and the Western Empire broke up soon after.