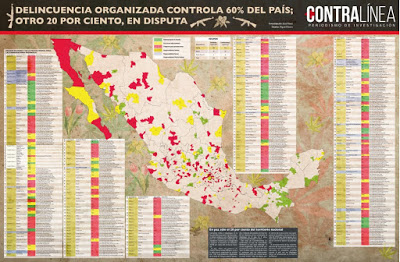 Facebook
Twitter
Pinterest
WhatsApp
The Mexican Government is admitting that 80% of its territory is controlled by drug cartels. The truth is that various and sundry cartels control 100% of Mexico. To include the Office of the President of Mexico.

A federal agency sent this fanciful map to Border Patrol in a daily intelligence briefing on May 9.

I’m not suggesting that it’s a deliberate fabrication but whoever made the map has never been on the ground in Mexico. The map does not extend cartel coverage of bribes to public officials from the very top to the bottom. It doesn’t include the many billions of dollars in loans from cartels to businesses at lower than market rates and the influence that generates nationwide. Far more loans are underwritten by cartels than banks in Mexico.

In short, the analysis is impossibly optimistic.