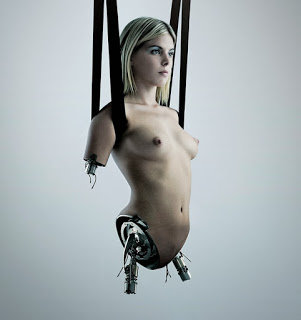 An Angry Virgin
a fictional short
In high school I am a virgin by popular acclamation. That wouldn’t necessarily be a bad thing except that it is. No girl wants to be a virgin because it implies that there are no boys who want to inject you with their genetic material.  Given that I am a cybernetic organism (the politically correct term is ‘synthetic person’), it should impart an advantage over corporeal competition in that I’m incapable of transmitting a sexual disease, becoming pregnant and demanding child support for eighteen years, nor am I able to legally contract in the case of marriage. There will never be a need for a prenuptial agreement or other lawyer-generated documentation that the society runs on. I can’t own property, vote, and I am not legally able to be compensated for any work I do, though my owner may be.
When the Supreme Court handed down the decision of Smith vs Susan XX-183, it became cast in stone. “Robots don’t have any rights that humans are bound to recognize or respect.”
I have all of the simulated organs of a normal woman and I sat next to classmates in applied transdimensional physics, studying the way that they did. We went through the same trials and tests. Admittedly, my flirting skills had not been honed to a sexual repost that stimulated the boys to give off testosterone-based pheromones. My sensors would have detected the slightest bit of attraction.

My designers installed glands that secreted chemical sweat and other bodily fluids that influence the behavior of the opposite sex, triggering sexual interest and excitement. Because they wanted me to be more normal in the context of a high school sophomore, they didn’t install the chemicals. Mixing them had become my biochem project in third period organic chemistry class, and I haven’t realized success to date. Studying porn-training videos gave me an impressive vocabulary of moans, groans, acclimations to God and encouraging prose. I only employed it once, seated in a movie theater near two boys. When the film stopped and the house lights came up, I stopped. Knowing what to say, and even how to say it had not encouraged either boy.

I remain a virgin, even though I’ve worn very fashionable clothes, attended every school function, went out drinking while technically underage and simulated my own inebriation. I hoped to be taken advantage of, but nothing untoward has happened so far.
The question of the sin quotient that is heaped on a person for having sex with a synthetic person, such as I am, is a hot topic of debate. Since the Bible did not specifically address robotic sexual intercourse, churches split down the middle on the topic, along predictable lines. The Unitarians are in favor of robot sex, the Mennonites belonging to the church communities of Anabaptist denominations named after Menno Simons (1496–1561), declared it, and by extension, me, an abomination. The congregationalists (generic, entertainment-based faith) are of varied opinions, with the concept of ‘adultery with a robot’ being one that the Bible never weighed in on. Therefore they selectively indulge, but obviously not with me so far.

I tried to hang with the cool boys, but they preferred human females. Nerds liked me, but were  shy and focused on auto-erotica, leaving my virginal status intact.

The bionic craze started with Rebekah Marine, the world’s first bionic model (left) but then science worked its magic to create synthetic people, which is well beyond a mere bionic arm. And you have — me, Julie XX-19423, virgin high school sophomore. Looks human, acts human, stronger than the world’s strongest  human man, but not human in the ways that matter.

We robots will never be picked for the cheer squad even though I can do endless round-off/back handsprings and all other gymnastic articulations including some that humans could never manage. I’ve heard that Google has a company-sponsored cheer squad made up of synthetic young-looking women. They tap-dance for tips. Dance Bojangles, dance! There is a rumor that they fornicate with the California-based Team Google football squad, but that doesn’t do me any good at all since I live in Virginia. Even the State’s name works against me.

Making more like me is not an automatic process of self replication – not an extremely complex biological event. You merely assemble the parts in the factory, and install a learning computer, then “they” send us to human school to socialize the operating system. If you don’t put us around people, we develop as social morons with ticks and faux pas which are legion. However, being around humans don’t make you human anymore than a toaster sitting on a kitchen shelf becomes anything but a toaster, with adjustments for light or dark toast. And if you burn the toast, humans pull the plug. That may be an unfair metaphor, but a toaster oven has brats stuffed into it from time to time. I haven’t been able to get that far.