The addicts of Social Justice seek forever to be outraged at some nonexistent injustice in the most vulgar terms possible, so that they can paint themselves as martyrs and crusaders in a righteous cause, but without the inconvenience of suffering genuine martyrdom in a struggle against a real injustice.
In a different country at a different time, one might seek out the relatives of the cop killers and obliterate them and their extended seed from the gene pool. I’m thinking on the Mongols, who ruled over Pax Mongolia for a century or so where there were no lawless people. The lawless were obliterated along with their families, their towns, etc.  There is no danger of that today.
A dead police officer brings a legion of mourners, a dead black person in the inner city, murdered by another black person doesn’t bring many who mourn their passing. A dead black felon, stopped by the police invites riots. Such is the nature of our strangely lawless nation and the Social Justice warriors who have been elected to high office by low information voters.
The social justice scam supports more legislation wherein every new law and regulation, predicated on social justice and income evening is an opportunity for graft and extracting campaign contributions from businesses who either want to be left alone or pay for legislation that will be used to hurt their competitors. Social justice has “pay to play” at its very core. To maintain power, they whip up fear of whoever would oppose their tyranny — shying away from an actual solution so that the issue can be revisited during the next election cycle. The endless wars on drugs, illegal aliens, and poverty have all been moves to consolidate power.
The building of a grievance culture is the very marrow of the Democratic Party. To effectively address any grievance is to loose your constituency. Social justice, then, is a never ending struggle that is renewed over-and-over again in much the same way as the fight against global cooling in the 90’s was reinvented as global warming in the early 2000’s and was then climate change. As each is found to be unsupportable, the social justice of ‘climate disruption’ (whatever that is) was born.
Job Participation Rate
According to the U.S. government’s Bureau of Labor Statistics, the labor participation rate has hit 62.6 percent. That’s the worst in 38 years. The “labor participation rate” measures the percentage of people age 16 or older who are working or actively looking for a job.
This means more than 37% of America’s potential work force has given up or isn’t even trying to find a job. More than one in three. And that means the burden of feeding the payroll tax monster–paying taxes on wages and for social security–is falling upon a shrinking group of people who do work.
For all you Haters
Life is hard, times can be grim for all of us. The Hillary Clinton e-mail circus has offered some comic relief. Watching Trump/Fiorina/Carson lap the political elite on the track to the White House has offered its own brand of satisfaction, and dare I say, ‘entertainment’. 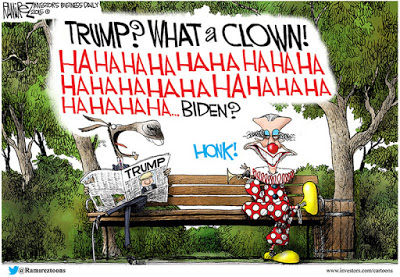 ABSOLUTELY nothing that we’ve seen yet has come close to matching the steam calliope – three ring circus of a Biden campaign for president. Slow Joe and Elizabeth (Fake Indian) Warren would be a pair to draw to, and will promise the 24 hour cable news cycle with grist for the balance of the campaign. The promise of another four years of Biden/Obama/Warren should send chills down your back and another 8 or so trillion in debt as the meter pushes toward $30 trillion owed.
This is not to say that I don’t want to see Biden run and replace Hillary (the yet unindicted – hurry up FBI) as the candidate of choice for the Democratic Party. I need the laughs. I really do. We need to suggest that Biden do a Dangerfield schtick where he can’t get no respect…Maybe something for Saturday Night Live?
And how come Saturday Night Live isn’t doing skits on Hillary’s classified home-email server? 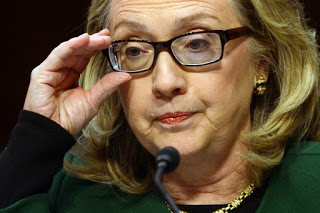 The handlers are trying to earn their large paychecks this week. The Clinton Campaign has announced the fourth (or fifth) re-boot of Hillary’s bid for the presidency. You will see a more jovial, more lovable and more credible candidate, even though she still won’t speak to the press. The joviality and cordial ‘love’, will be reserved for paid shills within the mainstream media who will hail her re-boot a success even as her numbers plummet in the polls. I’m suggesting that we’ll see a return of George Stephanopolous, who will ask Hillary about her childhood and parents so that she can ‘cry on command’ for the benefit of the audience. Naturally The View will be pre-empted to get the most sympathetic group possible to weep with the candidate.

(live leak) Trying to prove that a candidate can be groomed to be likable, the Democrats, who put all their money and faith behind Hillary Clinton, will subject us all to moments of ‘planned spontaneity” like tv shows and house parties. Because nothing makes you forget a candidate is lying to cover-up their inappropriate activities like a good laugh.

These posters are officially out of date with the most recent re-boot of the softer, kinder, funnier, more matronly, grandmotherly Hillary Clinton. If you go by her house, stop in for a freshly baked cookie or slice of pie and a glass of milk. 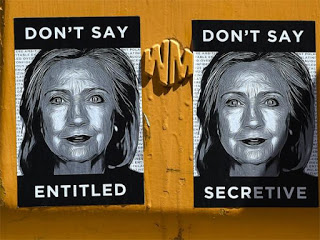 Does anyone remember Benghazi? This is the date that we need to keep in our hearts in honor of the brave men who died there fighting radical Islam.

Oh, right, at this point, what difference does it make?