This little word, HMS, is often found when talking about British ships. And some may wonder what exactly is meant by it. Well, actually the prefix is H.M.S. and means – His/Her Majesty’s Ship. Now and then you can find another prefix like e.g. the Bounty which is actually not HMS but HMAV – His Majesty’s Armed Vessel. But it gets tricky when it comes to the history. It is striking that this prefix does not appear from the beginning of the Navy’s existence. The prefix is not found on the ships of Henry VIII, where they only bear their names.

When exactly the ships started to carry the prefix His Majesty’s Ship but according to the Royal Navy Museum it is assumed as follows : The abbreviation HMS came into common usage around 1790s. Prior to this, ships were referred to as “His Majesty’s Ship” in full to indicate it belonging to the Royal Navy. The earliest example of the abbreviation being used is in 1789 when it was used for HMS Phoenix. Chatham Historic Dockyard Trust also describes it as follows: “It wasn’t until 1789 that the use of the HMS designation became standard in the Royal Navy although there were some uses of it before this.

The question still remains, however, as to what exactly started the use of the full prefix “His Majesty’s Ship”. It seems to have originated under Charles I, when Samuel Pepys reformed the Navy 1649-1689. Unfortunately, over time it has become common practice to give all British ships the prefix, so the origin is no longer fully traceable.

Ships during the late 1840’s and early 1900’s such as Titanic were all designated RMS for Royal Mail Ship. It was applied to all ships carrying Royal Mail.

On the morning of 28th April, the Royal Navy sloop, HMS Rose found herself in one of the most feared situations such a ship could face. Isolated and becalmed, Danish gunboats supported by a of sloop of war were approaching. Experienced and aggressive adversaries, the Danes specialized in overwhelming vessels like the Rose.

Master and Commander Thomas Mansell, commander of the Rose ordered his crew to action stations and to man the sweeps to attempt to row out of the dead calm. But Rose could not escape the closing gunboats who opened fire, hitting the hull and rigging. This onslaught continued for almost an hour without the Rose returning fire and all the time suffering more and more damage. Mansell kept his crew hidden and out of harm. Only when the gunboats were within grapeshot range was the order given by Mansell to open fire with all available weapons, from cannon to small arms. The ship was fitted with carronades, which were particularly effective when using grapeshot.

The desperate close fought battle raged for another hour before the Danes gradually withdrew from the action and the withering close range fire of the Rose.

Rose managed to sink one gunboat, captured another and caused considerable damage to others. Though HMS Rose suffered substantial damage herself in the battle, only five of Mansell’s crew were wounded. 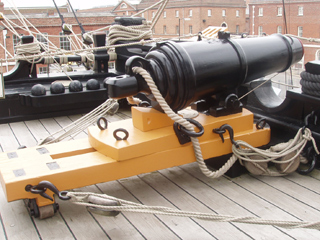 Note: A carronade was typically one fourth the mass of a cannon firing a comparable ball. For example, a 32-pound carronade weighed about the same as a regular nine-pound gun and so could be mounted on the weather deck of a ship rather than much lower in the hull. Note the short barrel and the non-standard gun carriage used by the carronade. The shorter barrel meant that the gun didn’t have the range of a cannon, but in close engagements, they could be very effective. They were first made by the Carron Iron Works, Scotland. 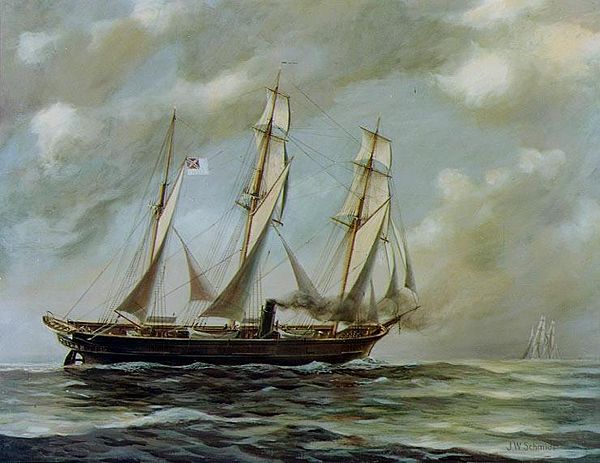 CSS Alabama was a screw sloop-of-war built in 1862 for the Confederate States Navy at Birkenhead on the River Mersey opposite Liverpool, England by John Laird Sons and Company. Alabama served as a successful commerce raider, attacking Union merchant and naval ships over the course of her two-year career, during which she never docked at a Southern port.

During her two-year career as a commerce raider, Alabama damaged Union merchant shipping around the world. The Confederate cruiser claimed 65 prizes valued at nearly $6,000,000 (about $98,000,000 in today’s dollars).

She was sunk in June 1864 by USS Kearsarge outside the port of Cherbourg, France. 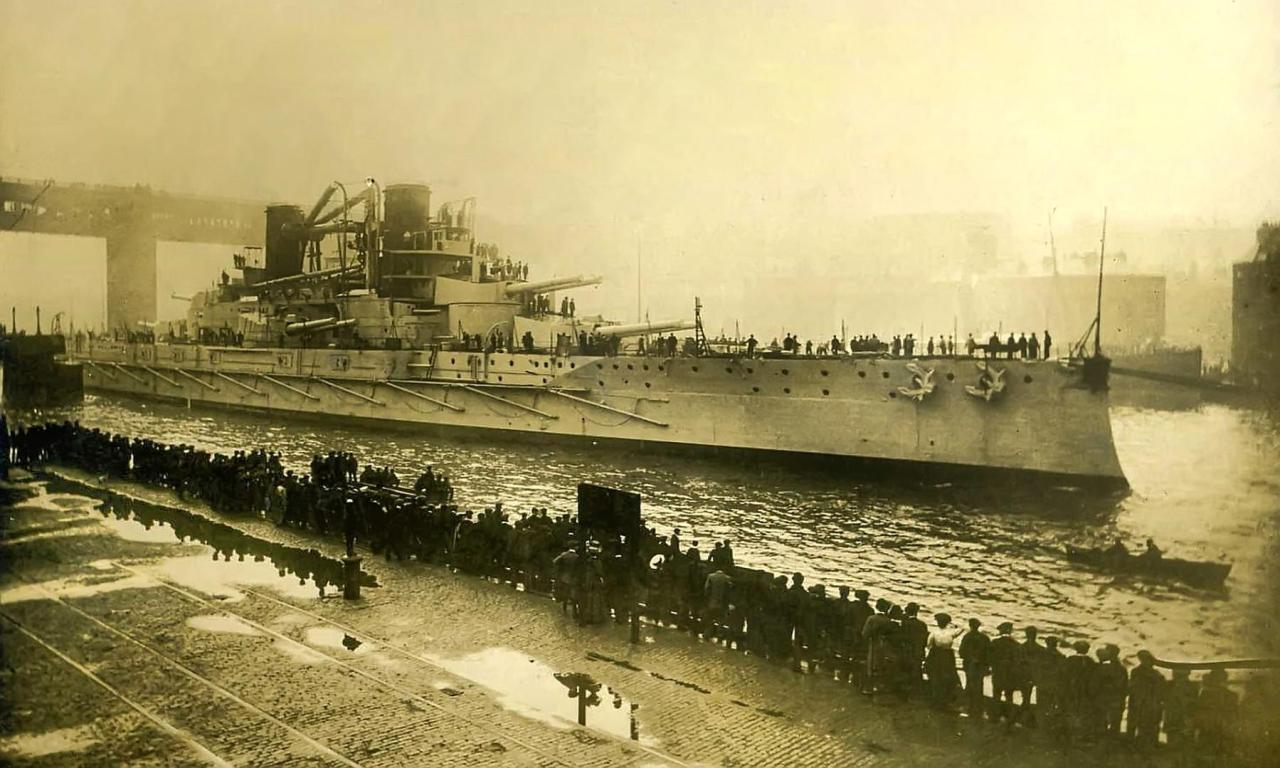 Brazilian battleship Minas Geraes on the River Tyne on August 16, 1909, while being towed from Armstrong’s shipyard in Elswick for retrofitting in Newcastle, at the Vickers shipyard. 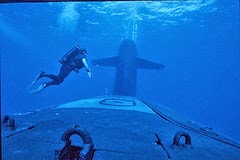 Retro: your favorite blogger, adjacent to the sail of USS Cavalla SSN 684,  Sea of Cortez c. 1986, deployed with SEAL Delivery Vehicle Team One for training while assigned to NR ST 1/3/5.

In 1983, Cavalla became the first submarine to successfully perform dry deck shelter—a tank attached to the after deck back of the submarine allowing personnel to leave the submarine while submerged—operations. 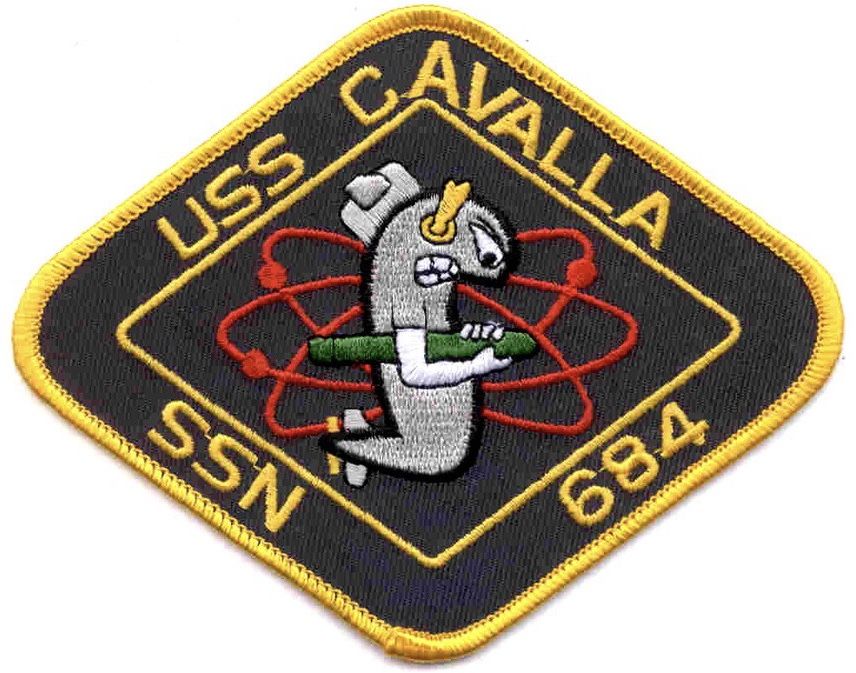 During her Western Pacific deployment of 1985-1986, Cavalla supported critical dry deck shelter operations for SEAL team certification. She was awarded the Meritorious Unit Commendation for these operations.

In addition to this award, her crew members also earned various U.S. Navy ceremonial certificates during this same deployment: “shellback” status for crossing the equator, the Order of the Ditch on two occasions for transiting the Panama Canal, the Domain of the Golden Dragon on two occasions for crossing the International Date Line, and the Order of the Spanish Main for operating in the Caribbean Sea.