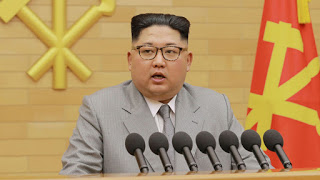 Facebook
Twitter
Pinterest
WhatsApp
Korean Unification
The New York Times published a signed article on 28 January in which the author noted that South Korean agreement to North Korean participation in the Olympics and the several other manifestations of Korean unity have produced no groundswell of South Korean support for reunification or for President Moon.
South Korean President Moon is a strong supporter of activities that promote Korean unity. However, the Times reported the results of a recent poll that showed over 70% of South Koreans of all ages oppose the joint women’s hockey team. Over 80% of South Koreans in their 20s and 30s oppose the joint team and reunification with North Korea. They fear it will drag down the South.
Prosperity in the South has reinforced the sense that life and culture in South Korea have diverged from North Korea and weakened the allure of a single Korean identity. The distance between South Korea and North Korea cannot be measured in miles any longer and continues to increase.
Kim Jong Un might not care about the attitudes of South Korean youths, but the emphasis on reunification, as manifest in last week’s call to all Koreans, indicates Kim and his advisors are unaware of the shift in South Korean attitudes. The North Koreans made a hard-sell pitch to an audience that mostly yawned at them.
He’ll have to go back to the threats of artillery strikes and dropping nuclear weapons on his fellow Koreans…
Syrian Kurds vs Turkey Update (Operation Olive Branch)
Seven days into the campaign, Turkish soldiers and their Free Syrian Army rebel fighter allies have fought to gain footholds on the western, northern and eastern flanks of Afrin.

Weather hampered air support and heavy artillery fire killed one Kurdish civilian according to the Syrian Observatory for Human Rights. The Turks (CNN-TURK) claimed to have seized high ground east of Afrin, but that is not confirmed.

On 28 January, Turkish President Erdogan said that Turkey would clean the entire Syrian border of People’s Protection Units (YPG). “Step by step, we will clean our entire border,” Erdogan said in a speech after the army said it had captured Jebel Bursaya. The high ground mentioned above, the hill  that lies between (and south of) Afrin and Azaz. While the Turks claim it as a victory, getting from the hill to Afrin is more difficult than simply saying you’re going to do it.
Deputy Prime Minister Bekir Bozdaq (threatening the USA) said, “Those who support the terrorist organization will become a target in this battle. The United States needs to review its solders and elements giving support to terrorists on the ground in such a way as to avoid a confrontation with Turkey.”
With the backing of Russia, Iran and Syria, the Turk promise to  clash with US forces if any remain in Manbij.

The Turkish advance has been hampered by the American armed Kurdish Resistance. They’ve lost people and equipment. The extent of those losses have yet to be reported in open source channels.