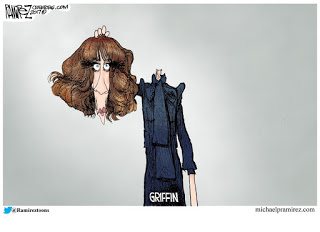 Facebook
Twitter
Pinterest
WhatsApp
Many people who read this blog are unreasonable. Being unreasonable is a lot like being deplorable. An unreasonable approach to life doesn’t suggest a rude life, or a bullying life. George Bernard Shaw had something to say on the subject.

Progressives and their acolytes in the pugnacious, elite, corrupt, lying mainstream media think that they are being unreasonable and avant-garde when they are behaving in their cynical, nasty, unpleasant way by doing or saying things that are myopic, cruel, bullying and/or filthy.

Nobody is more filthy and inappropriate these days than Kathy Griffin. I don’t want to write much more on the subject except to say that I challenge her do play her filthy games with Barack or his angry wife as the brunt of her stunts. Cruel and inappropriate behavior are not cute, not funny and doesn’t figure into being either ‘deplorable’ or ‘unreasonable’. It’s vulgar.

What is at the center of galaxies — what holds them together? Conventional and current wisdom suggests that there is a supermassive black hole. Most scientists agree that black holes, cosmic entities of such great gravity that nothing can escape their grip, are surrounded by a so-called event horizon. Once matter or energy gets close enough to the black hole, it cannot escape — it will be pulled in. Though widely believed, the existence of event horizons has not been proved. This is a follow-on to a previous blog posting on stellar death.

This artist’s impression shows a star crossing the event horizon of a supermassive black hole located in the center of a galaxy. The black hole is so large and massive that tidal effects on the star are negligible, and the star is swallowed whole. The effects of gravitational lensing distorting the light of the star are not shown here.
Credit: Mark A. Garlick/CfA
Some theorists suggest that there’s something else at the center of galaxies — not a black hole, but an even stranger supermassive object that has somehow managed to avoid gravitational collapse to a singularity surrounded by an event horizon. The idea is based on modified theories of General Relativity, Einstein’s theory of gravity.

“We estimated the rate of stars falling onto supermassive black holes,” Lu said. “Nearly every galaxy has one. We only considered the most massive ones, which weigh about 100 million solar masses or more. There are about a million of them within a few billion light-years of Earth.”
They then searched a recent archive of telescope observations. Pan-STARRS, a 1.8-meter telescope in Hawaii, recently completed a project to survey half of the northern hemisphere sky. The telescope scanned the area repeatedly during a period of 3.5 years, looking for “transients” — things that glow for a while and then fade. Their goal was to find transients with the expected light signature of a star falling toward a supermassive object and hitting a hard surface.
“Given the rate of stars falling onto black holes and the number density of black holes in the nearby universe, we calculated how many such transients Pan-STARRS should have detected over a period of operation of 3.5 years. It turns out it should have detected more than 10 of them, if the hard-surface theory is true,” Lu said.
They did not find any.
“Our work implies that some, and perhaps all, black holes have event horizons and that material really does disappear from the observable universe when pulled into these exotic objects, as we’ve expected for decades,” Narayan said. “General Relativity has passed another critical test.”
Arab vs Arab vs Persian

The ongoing struggle in Yemen continues. Forces loyal to the United Arab Emirates are reported to have taken control of the airport in Aden, after ousting fighters loyal to Yemen President Mansour Hadi, whom the Saudis back.

Context and Precedence: The Saudis and Emiratis have disagreed for months over the conduct of the anti-Houthi (anti-Iranian) campaign and about the role of Yemen President Hadi. The Saudis back him as the rightful president of Yemen.

The Emiratis oppose him because in early May he dismissed two officials from southern Yemen whom the Emirati leadership favored. Southerners demonstrated in Aden to protest the firings and announced their intention to secede and set up an independent south Yemen state. The Emiratis support the Southern Movement.

The fighting this week indicates that the political tension has worsened and transformed into exchanges of gunfire in a fight for control of the airport. The Emirati and Emirati-backed forces liberated Aden airport from the Houthis in 2015, but that was before the latest split.

Now they have taken it back. Control of the airport enables the southerners to block Hadi from arriving in Aden, as they did a year ago. The civil war is now even more complicated than before and still far from ending.

The Saudis would like to see the US help them in their war against both the Iranian/Persian proxies (Houthis) and the Emiratis. They tried to sucker Pakistan in but the Pakis would have none of it. The US likewise, needs to steer a very wide course around this typical Middle Eastern power struggle.