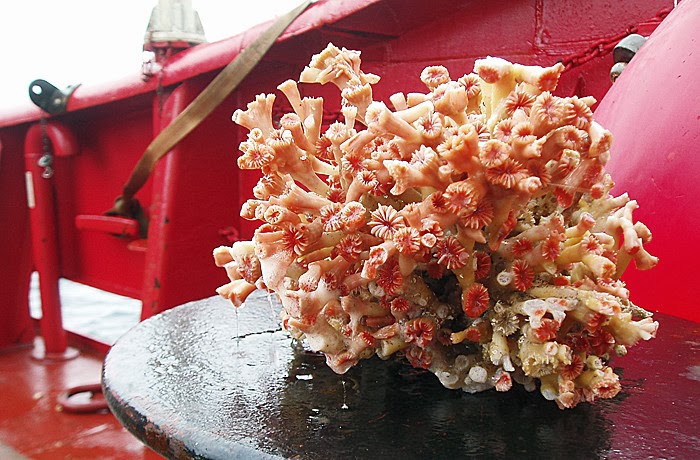 Facebook
Twitter
Pinterest
WhatsApp
(Denmark Technical University Report) By sheer coincidence, Canadian researchers have discovered a reef of living cold-water corals in southern Greenland. The first-ever Greenlandic reef is located in southwest Greenland and was formed by cold-water corals with hard limestone skeletons. There are several species of coral in Greenland, but this is the first time that an actual reef has been found. And here all of the ‘global warming’ crowd has said that coral will all die off as the warm water coral cools off. (due to global warming – go figure, and whatever)
Normally, coral reefs are associated with the tropics, but they are also found in cold waters. While the tropical coral reefs depend on light to survive, cold-water coral reefs live in total darkness, at depths the sun’s rays never penetrate. Nevertheless, they have many colourful residents and many different kinds of organisms living in them.
Coral reefs are built up of thousands of small coral animals that live in a large colony which forms a common limestone skeleton. While hot water corals obtain some of the energy they need to grow from the light-dependent green algae which live in the corals, cold water coral get all their nourishment from small animals, which they catch. Thus, they are not dependent on light and can live in very deep water.
If I’d found it, I would have gone straight to the Nobel Committee in the hopes of being awarded a peace prize so I could be recognized as being as progressive as Al Gore, Barack Obama and Yasser Arafat and the Obama mentor, Jimmy Carter. After finding coral is something. Obama didn’t do anything and Gore lied about science. Yasser killed Jews for fun and profit and Carter – wasn’t he frightened by a rabbit once?