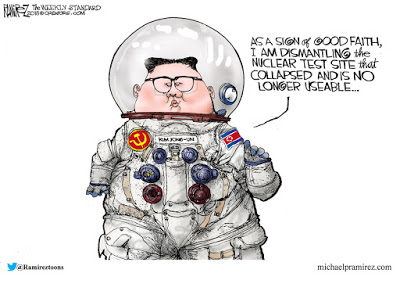 Facebook
Twitter
Pinterest
WhatsApp
Class Struggle?
The fat kid with the bad haircut (Little Rocket Man) wants the world to respect him. Those expectations of some Americans are a long way from being realized. The Democrats seem to cherish him, but they also cherish the murderous savage members of the MS-13 gang, and they work hard to insure that millions of babies are killed in utero every single year (it’s how they roll).

Nork generals, shot callers and power brokers do not stand to benefit from new peace arrangements with the free world. They have all of the luxury items that their hearts desire now. And as with many privileged classes in countries run by tyrants, it can only go downhill from here.
As a result, the rhetoric against the US is ramping up inside North Korea, the Hermit Kingdom, on the eve of potential peace talks.
Kim Jong Un, who was raised in Europe, may want to see some movement away from the decaying, backward nation that he runs, and to improve things. Irrespective, that is likely not the opinion of the elite class who like things the way that they are.

The filthy truth about the Obama White House and its efforts to spy on the Trump Campaign (false information to obtain FISA warrants, spies embedded with the campaign, ‘unmasking’ of names on information collected to discredit members of the campaign) make the country look more like a banana republic every single day.

Democrats should worry because if this becomes the way we do things, there is nothing stopping the current Republican administration from weaponizing the government against them. The point is that the investigation of the corrupt, elite FBI needs to proceed to a grand jury, and from there to OPEN COURT where the criminal trial needs to be televised. I’m not suggesting that it should be a guillotine event, but unless people are held accountable, it will continue, and will likely get worse. 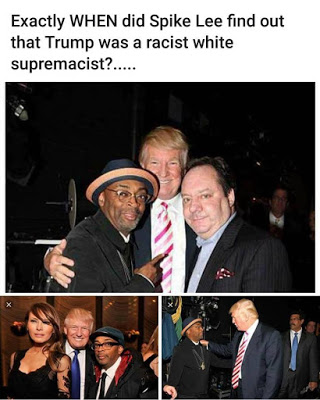 Spike Lee produces and directs films that few people see, but he’s celebrated because of his race in much the same way as some other under achievers are. Rep. Maxine Waters (D-CA) comes to mind.

He was a big supporter of Donald Trump until the Democrat machine (which runs the plantation where he lives) decided to have him ramp up his rhetoric against the President. He’s been spewing some hate filled talk about how President Trump is worse than Hitler recently in public.

When you think about the state of the economy, the tax breaks to small businesses and the low unemployment numbers – particularly among minorities, you’d think that Spike would be up at the microphone praising President Trump for his accomplishments. But that’s not the case. He’s out, spewing hate and Democrat talking points that he knows to be false.

The truth is that Spike Lee is a bigger whore than Stormy Daniels every thought of being. Sorry Spike, you’re a pathetic excuse.