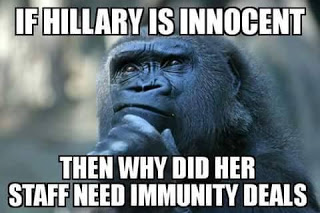 Harambe would surely have asked the question if he hadn’t been shot in the prime of life – but he’s with Elvis – in a better place. Even though this is a sermonette, I am not going to take this any further than that.
Even though a fifth grader would have asked the question – “If Hillary is innocent, then why did her staff need immunity deals” – NOBODY in the mainstream media did, which confirms to me the long-held belief that they are NOT smarter than the average fifth grader. Mainstream media people are progs by definition, which means that believe only what they are told to believe by their betters/masters.

Now that it’s too late to indict Hillary before the election, the corrupt FBI is back into the Hillary Clinton case. It’s re-opened. How convenient is that? I’m sure that Hillary will clear this up if she wins the election.

There are also the elite pundits – who didn’t ask that question either – and are paid millions of dollars a year to formulate questions. Some of them (George Will comes to mind and so does Carl Rove) are so beat up that Trump is the Republican nominee, that they are pickling their brains with gin to avoid having to ask any questions. You only need say, “Trump” and they reach for the hip flask in an effort to dull the pain. 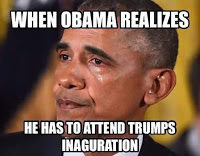 It will be interesting to see Barack at the Trump inauguration when Trump has promised to undo every-single-screwup that Obama made. Then again, I don’t know what Barack has to hide. He may be fleeing to Kenya to avoid prosecution along with the Clintons and may miss the big show. One can only guess how much he will steal from the White House the way that the Clintons did when they left office.
And what of Michelle Obama’s 112 staff people? Where will they go for work? Listing the previous boss as a “wookie” clearly won’t get them government work in a Trump Administration. Maybe they can go to Chicago and claim ‘legacy status’ and get lucrative city jobs? Most city workers in Chicago are said to have dead relatives who are also on the payroll working for them. Naturally, they accept the checks each month on behalf of family members. Thus those 112 staff people could translate to 500-600 more pay checks going out to new “city workers” in the windy city, all of whom will vote “Democrat”, the party whose totem is an ass.