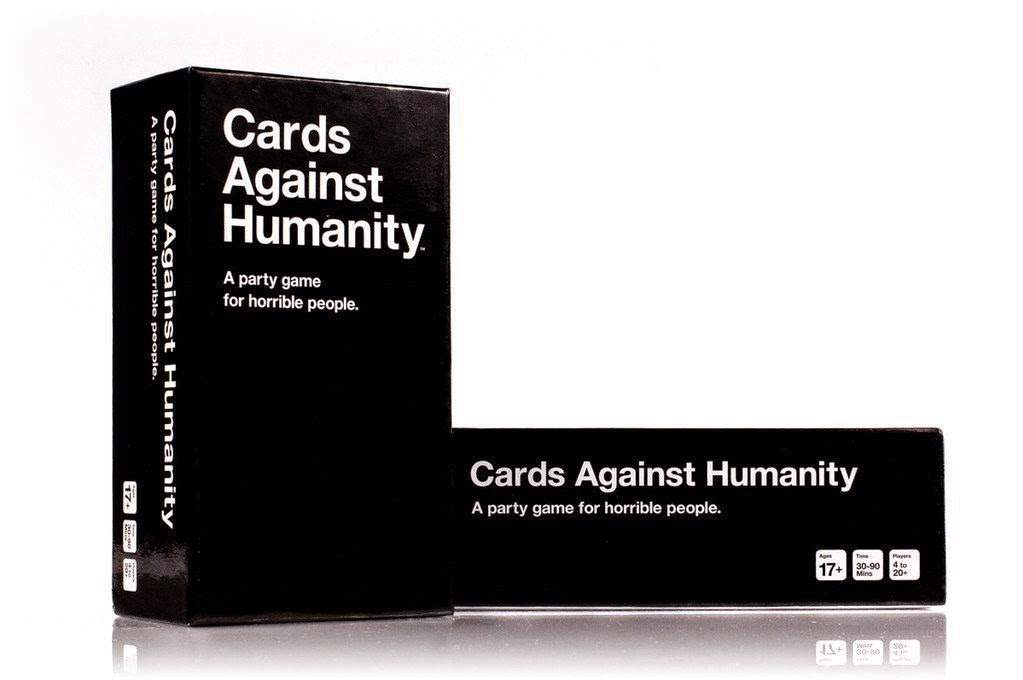 Facebook
Twitter
Pinterest
WhatsApp
Appropriate PARTY GAMES that can be played sober or fully clothed become difficult to find once you’re out of high school. If you are bothered by guilt-related matters such as social justice, income leveling and redistribution, world peace, saving the primordial forests of Earth or global warming, you should stick to games that can be played while blind drunk or naked – the way witches party in Austin, TX, at solstice.

The cards aren’t waterproof so I advise against playing this group game in a jacuzzi – but if you’re in a jacuzzi with your friends, you’re likely killing (a few) bottles of wine and doing other things that I don’t need or want to know about.  Not now, not ever.

I am not suggesting that Cards Against Humanity are for everyone. You need to have a warped sense of humor or a ridiculously warped sense of humor (better still) to enjoy playing it. You also need friends who are of the same mindset. There are also expansion sets for those of you who find that one deck of cards against humanity is not enough.
I don’t own stock in this company, so the referral brings me no personal remuneration.
Each deck contains Black Cards and White Cards. At the start of each round, one player (The Judge) will select a Black Card from the deck. The Black Card contains a phrase or question that needs to be answered/completed.
Players each have 10 White Cards, which they use to complete the Black Card’s question(s)/blank(s). After each player (besides The Judge) has chosen the best White Card in their hand to go with the Black Card, all players turn their White Cards in to The Judge. From here, The Judge reviews the White Cards and decides his/her favorite pairing of the White and Black Cards. The player who played the Judge’s chosen White Card gets a point (if that matters to your group) and the gameplay starts all over.
If you are playing the drinking version, the losers take half a shot of Cuervo with salt and lime, each, to loosen them up. The winner, blessed with a keen sense of humor, naturally doesn’t need one (this round). On to the next round.
Let me give you an example with word-for-word examples of what you’ll find on the Black and White cards.
1. The Judge plays a Black Card that says:
“What did I bring back from Mexico?”
or
“I’ve got 99 problems but ___________ ain’t one of ’em.”
or
“Life for the Native Americans was forever changed after the white man introduced them to ____________.”
or
“That’s right, I killed ____________.”
or
“Why am I sticky?”
or
“What would a whale look like if you dropped it off the Empire State Building?”
or
“What is there a ton of in heaven?”
or
“What are my parents hiding from me?”
or
“What has been making life difficult in the nudist colony?”
or
“What did my true love give me on the Third Day of Christmas?”
or
“Anthropologists have discovered a tribe that worships _____________.”
or
“While the United States raced the Soviet Union to the Moon, the Mexican government funneled millions of pesos into research on ___________.”
etc.
2. All players (except the Judge) choose a White Card from the ten that they are holding.
3. After everyone has chosen their White Card, the Judge reviews the responses: “A defective condom”, “Harry Potter Erotica”, “throwing a virgin into a volcano”, “Old-people smell”, “a micropenis”, “a balanced breakfast”, “firing a rifle into the air while balls-deep in a squealing hog”, “Rush Limbaugh’s soft, shitty body”, and “Farting and walking away.”
4. The Judge chooses “A defective condom” and the player who picked this White Card wins the round.
Keep in mind that there are some edgy, racy, raunchy, explicit, politically incorrect White and Black cards. In fact, that’s the point.

You can create your own white cards. (download PDF from Amazon)