A Cracker in the Soup 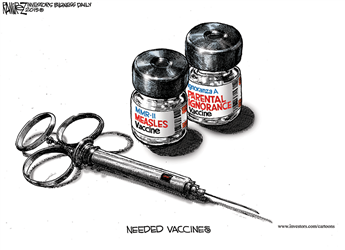 I’m willing to be persuaded that I’m all wrong, but I am in favor of vaccinations to prevent diseases that are easily cured – by those vaccinations.
The world ridded itself of small pox and polio, though there have been disturbing reports that polio-like illnesses are returning to the stage. Still, those were massive achievements, brought about by international cooperation insuring that people were immune. Take one look at somebody with polio or small pox and you’d really want to be immune. Small Pox, for example, wiped out roughly half of the American Indians in the 1700-1800 timeframe. It’s no small thing.
When I was a kid there was no vaccine for measles, chicken pox, mumps, etc. and the diseases ran rampant through the ranks of elementary schools. I had Rubella once and red measles twice, chicken pox once as a child (and again as an adult at age 30). It would have been a good thing if I hadn’t had any of it.
I don’t believe that the State should force vaccinations, but if a child wants to attend public school, they need to have their shots. You can home-school if you want to spin the wheel and dodge that bullet, or you can send your child to a private school that doesn’t require them. But are you really helping your children out?
Adult chicken pox is something to be dreaded because it comes at you like a freight train. Trust me. My face is scarred by that encounter with chicken pox, and when my wife took me to the hospital, I was sitting in a wheel chair and they asked if anyone was with me, she denied that she was my wife because I looked so bad. True story. I’d rather have had the vaccination. But that’s me.