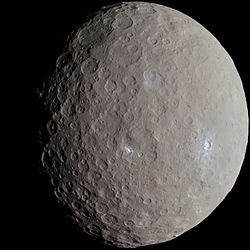 Facebook
Twitter
Pinterest
WhatsApp
It’s as big as Texas, but scientists don’t want to call Ceres a planet, but we never thought of it as a planet the way we did with Pluto (demoted to dwarf planet status like Ceres). Scientists are critical of Ceres because it’s in the asteroid belt between Mars and Jupiter but doesn’t have the mass to clean up the other material in orbit with it. But science needs to take another look at the place and have a little more respect. It does represent 1/3 of the mass in the asteroid belt.
The robotic NASA spacecraft Dawn entered orbit around Ceres on 6 March 2015. Pictures with a resolution previously unattained were taken during imaging sessions starting in January 2015 as Dawn approached Ceres, showing a cratered surface. Two distinct bright spots are believed to represent cryovolcanic action (ice volcanoes). 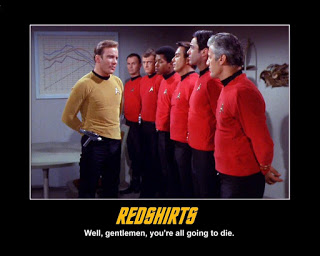 On 11 May 2015, NASA released a higher-resolution image showing that, instead of one or two spots, there are actually several. On 9 December 2015, NASA scientists reported that the bright spots on Ceres may be related to a type of salt, particularly a form of brine containing magnesium sulfate hexahydrite (MgSO4·6H2O). In October 2015, NASA released a true color portrait of Ceres made by Dawn. In February 2017, organics were reported to have been detected on Ceres in Ernutet crater.  Think of a big muddy ball with a thin crust of ice, in space. with the possibility of bugs slithering around in it and you have Ceres. Will those bugs develop a taste for human brains? It remains to be seen. If astronauts land, we need to have two or three of them (they need not have names) wearing red shirts (link)…for obvious reasons.
A study,  published in the journal Nature Geoscience used data from NASA’s Dawn spacecraft to identify three different types of landslides, or flow features, on the Texas-sized asteroid. Georgia Tech Assistant Professor and Dawn Science Team Associate Britney Schmidt led the study. She believes it provides more proof that the asteroid’s shallow subsurface is a mixture of rock and ice.

“Landslides cover more area in the poles than at the equator, but most surface processes generally don’t care about latitude,” said Schmidt, a faculty member in the School of Earth and Atmospheric Sciences. “That’s one reason why we think it’s ice affecting the flow processes. There’s no other good way to explain why the poles have huge, thick landslides; mid-latitudes have a mixture of sheeted and thick landslides; and low latitudes have just a few.”

The study’s researchers were surprised at just how many landslides Ceres has in general. About 20 percent to 30 percent of craters greater than 6 miles (10 kilometers) wide have some type of landslide associated with them. Such widespread features formed by “ground ice” processes, made possible because of a mixture of rock and ice, have only been observed before on Earth and Mars.

Based on the shape and distribution of landslides on Ceres, the authors estimate that the upper layers of Ceres may range from 10 percent to 50 percent ice by volume.
“These landslides offer us the opportunity to understand what’s happening in the upper few kilometers of Ceres,” said Georgia Tech Ph.D. student Heather Chilton, a co-author on the paper. “That’s a sweet spot between information about the upper meter or so provided by the GRaND (Gamma Ray and Neutron Detector (GRaND) and VIR (Visible and Infrared Spectrometer) instrument data, and the tens of kilometers-deep structure elucidated by crater studies.”
“It’s just kind of fun that we see features on this small planet that remind us of those on the big planets, like Earth and Mars,” Schmidt said. “It seems more and more that Ceres is our innermost icy world.”
What sort of rover would you put on an icy world? Likely tracks instead of wheels, though the gravity on series is much less than on Mars. I think that it’s high time that we sent a machine to crawl around Ceres — and return to Earth with what it finds.

THEN AGAIN: What if the asteroid that killed the dinosaurs was a UFO and we’re the aliens?