The DPRK Military as a Commercial Enterprise

Facebook
Twitter
Pinterest
WhatsApp
In China, the People’s Liberation Army (PLA) is expected to be at least partially self-funded. It’s also true of the Public Security Bureau (the Chinese Police). This has been true for a long time but became more of an issue since China opened up to the west. Hotels, brothels and entertainment top the properties owned by the PLA. The Public Security Bureau’s holdings mirror those of the Army.
The PLA also owns vast tracts of land dedicated to farming ephedra (the essential ingredient in methamphetemine), and produces ketamine (which is often cocktailed with other drugs such as ecstasy – MDMA) that is sold outside of China. The corrupt, elite, smug, lying mainstream media  – and your government never discusses this open secret. Oh, well. Welcome to the machine.
Moving on, the Norks have copied the Chinese system. If you’re in the Nork Army and you’re a steady earner, you move up and get more medals. Loyalty is fine, but earning for the Fatherland and the the fat Un is right up there at the top of desirable traits.

Did you ever wonder where the components came from to build advanced Nork weapons like the missiles that they parade? This answers that question. The Army needs to earn hard cash through scams and schemes to buy components that are smuggled into the Worker’s Paradise. Thus, even though it doesn’t square with communist ideals, aggressive capitalism pays in the Democratic People’s Republic of Korea. If you’re an ambitious little Nork, you can get the best food, the best women and electric light – by earning it. 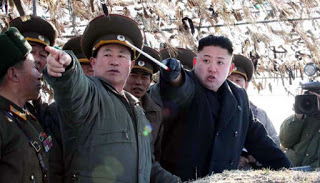 A number of North Korean officers made general (and were decorated for innovation) by running the US currency counterfeiting operation. They also counterfeit other currencies, but the state feels a particular joy in selling counterfeit US currency, usually at around .25 cents on the dollar at the source and in bulk. Largely $100 banknotes are counterfeited and are referred to by the US Secret Service as “super notes” because they can pass through US banks.

Lacking the PLA’s ability to host tourists and have them stay in hotels owned and operated by the Nork army, they make viagra, trade pharma drugs with Mexican drug cartels for cocaine at very attractive exchange arrangements for the cartels, etc. They’ll do just about anything that earns foreign currency and the capacity to buy what they need outside of Norkland.

President Trump threatened to retaliate against the Fat Un if he launched more missiles or lighted off a nuke. Want to know what he’ll do? Look at the the US Treasury and Justice and others working to seize vast financial holdings of the Kim family (meaning the Fat Un) overseas. He’ll hit the power elite in North Korea where it REALLY hurts. If you want details as to how this will happen, I’m not going to tell you. But it will be fun to watch.

On 19 April, the imagery analysts at 38 North published an update on activities at the Punggye-ri nuclear test site. Activity is reduced. Most vehicles are out of sight. Water is no longer being pumped from the north portal/tunnel. The nuclear test is on stand-by.