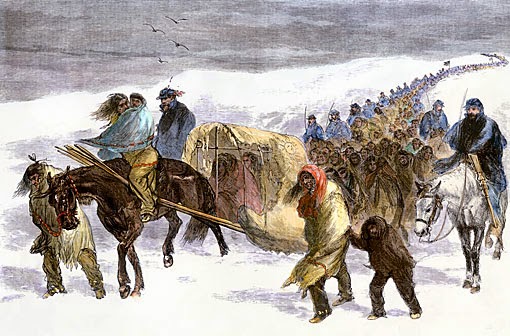 The Wounded Knee Massacre occurred on December 29, 1890 near Wounded Knee Creek on the Lakota Indian Reservation in South Dakota. It’s worth remembering. Americans, who happened to be native to the nation, had a few firearms in their midst. They had not used those firearms to kill or injure a human being. The Bill of Rights allowed them to keep and bare arms and they had offered no offense with those firearms beyond mere ownership.

On the morning of December 29, the entire Seventh US Army (Cavalry) Regiment surrounded the camp where they were ironically “under the protection of the army”. The regiment, commanded by Colonel James Forsyth, brought up four rapid fire Hotchkiss guns (light rapid fire cannons) to support the troopers.
They intended to disarm the Indians, even though few were armed. During  the process of disarming the Lakota, a deaf tribesman named Black Coyote was reluctant to give up his rifle, claiming he had paid a lot for it. Naturally, the US Government had no intention of reimbursing its value. A scuffle over Black Coyote’s rifle escalated and a shot was fired which resulted in the 7th Cavalry’s opening fire indiscriminately from all sides, killing men, women, and children, as well as some of their own fellow soldiers. The few Lakota warriors who still had weapons began shooting back at the attacking soldiers, who quickly suppressed the Lakota fire. The surviving Lakota fled, but U.S. cavalrymen pursued and killed many who were unarmed.
By the time it was over, more than 200 men, women, and children of the Lakota had been killed and 51 were wounded (4 men, 47 women and children, some of whom died later); some estimates placed the number of dead at 300.
Because of the fire of the Hotchkiss guns into their own ranks and cross fire from soldiers shooting at soldiers, twenty-five soldiers also died, and 39 were wounded (6 of the wounded would later die). At least twenty soldiers were awarded the Congressional Medal of Honor…for valor.
The massacre is an iconic reminder of the need to distrust government intentions, particularly when it comes to matters of firearms control and ownership.

The Lakota knew that without firearms, the old, young, weak, meek, silly and soft were nothing short of prey. Rules mean nothing because they are written for the law abiding. When you look how USGOV treated the Indians, the government was anything BUT law abiding. The law changed whenever it was convenient for the government and the Indians were always the victims because they had no voice and had surrendered recourse to the “Great White Father in the White House”.

Doesn’t it remind you of the lawless Obama Administration? If they want to destroy you, you go on the IRS hit list or some agency generates secret information without warrant (NSA domestic collection program) that they hand to IRS, EPA, or law enforcement. Whether trumped up or legitimate — who knows? 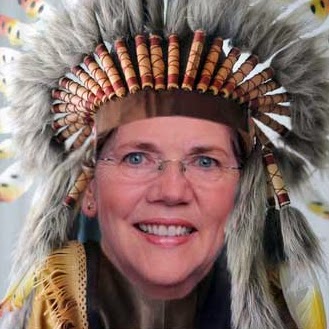 The Indians who surrendered lived by government whim and were taken down or killed/starved  — or not, based on that same whim. There is a hubris in America that it can’t happen to “us”, but the sad truth is that it can.

Go to any Indian reservation in America. Some are worse but others, but they are a people living on hand outs with somewhere near 80% alcoholism rates and very young mortality stats. Are Indian Reservations progressive utopian communities? I’m sure that progressives would say yes. Would Elizabeth (Fake Indian) Warren D-MA live in a hogan on the San Carlos Indian Reservation in Arizona? Don’t hold your breath.