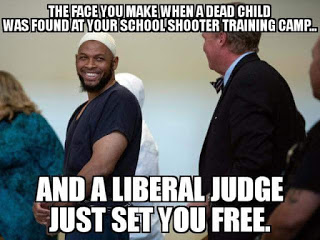 You murder your own son who suffers from epilepsy for being ‘a demon’, and abuse children while you train them to conduct school shootings. You’re taken into custody along with co-conspirators and then you’re released on a signature bond (no money changed hands) which is essentially an own-recognizance release.
Since when is a murderer and his co-conspirators given an OR release? The judge reasoned that it was because the murderer was a negro and a Muslim (members of an oppressed minority).
Law enforcement stressed that they were both a danger to the community – having murdered – and a flight risk. The judge, a democrat, rejected that as racist prattle.
Welcome to the progressive movement.