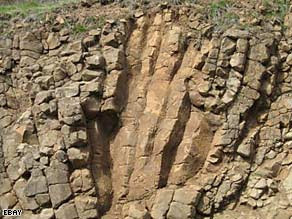 No, Jesus did not appear on a tortilla. Not this time.
(CLICK HERE) for the CNN story.
This time the hand of God appeared in Idaho on a rock face and it’s being auctioned on e-bay. There was a purported shift in the Earth on Lent (March 8) of this year and the hand appeared in Paul Grayhek’s (52) back yard. The hand is 9 feet tall and 4 feet wide and, according to Grayhek, appeared after he prayed for help after he lost his job.
Grayhek stated that he’s not auctioning the hand of God to get rich – on the contrary, the auction is merely to spread His word.
Make of it what you will. Since today is a Sunday, I thought the story would either strengthen your faith or your resolve toward skepticism in the daily discovery-for-profit of God’s face in every cloud, on every tortilla or on Paul Grayhek’s rocks, behind his house.