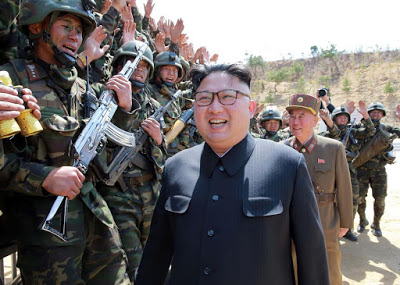 Facebook
Twitter
Pinterest
WhatsApp
A diplomat in North Korea’s Foreign Ministry said the threat of a nuclear test over the Pacific Ocean should be taken literally, CNN reported on 25 October. He said that it’s not a ‘threat’, it’s a ‘promise’.
Last month, September, North Korean Minister of Foreign Affairs Ri Yong Ho said Pyongyang will conduct the most powerful detonation of a hydrogen bomb over the Pacific Ocean.

Those who read the tea leaves for a living are predicting an above-ground test this winter. The mountain where they used to test nuclear weapons has collapsed because of the voids caused by testing. So the Norks have moved on.

The North Korean nuclear and missile programs still have some milestones to reach. North Korea has not performed a full range intercontinental ballistic missile flight and has only tested its nuclear warheads underground. The warhead and delivery system have not been mated in a combat simulation test. Today, they’re getting ready to test the weapon.
When the US deploys three aircraft carrier task groups in a single theater, that is an unambiguous indicator that the US is prepared for combat.

Three carrier task groups are in the waters of Northeast Asia. The timing of the deployments indicates the force is on station to back up the US President’s coming 12-day trip to Asia.

It would not be out of character for the North Koreans to do an above-ground test of a missile mated to a hydrogen bomb just to show President Trump who’s boss… If there are US assets in the area where the detonation takes place, it will mean war.

Kim Jong Un sent a congratulatory message to Chinese General Secretary Xi Jinping on Wednesday, 25 October, after the Chinese leader was elected as General Secretary of the Central Committee of the Communist Party of China, according to the Korean Central News Agency (KCNA). The full text follows.

General Secretary Comrade Xi Jinping:
I send you sincere congratulations on the fact that the 19th Communist Party of China (CPC) Congress proceeded smoothly and that you were elected as the party Central Committee (CC) general secretary and party Central Military Commission [CMC] chairman.
Today, the Chinese people have entered a path of building socialism with Chinese characteristics for a new era, under the leadership of the CPC CC with Comrade Xi Jinping at the core.
I wish you great success in your responsible work to implement the tasks presented at the 19th CPC Congress.”
I am convinced the relations between the two parties and two countries of the Democratic People’s Republic of Korea (DPRK) and China will develop in accordance with the interests of the people of the two countries.
(Signed) Kim Jong Un, chairman of the WPK (Workers’ Party of Korea)

It marked the first time since February that North Korea’s state media mentioned Xi in its reports, according to South Korea’s Yonhap news service.
The Yonhap report noted that the North Korean message did not contain a description of the North Korean-Chinese relationship. Kim is at least observing the minimal requirements of cordiality between communists and neighbors.
As a dedicated communist, General Secretary Xi disdains the dynastic quality of North Korea’s leadership and seems to dislike Kim Jong Un personally. Xi has not invited Kim Jong Un to visit China in any capacity since Kim came to power in late 2011.
In Xi’s news conference on 25 October, he said that the Central Committee received 855 congratulatory messages. He did not single out any of them for special treatment.
The North Koreans are screwing Chairman Xi Jinping’s chi, and his plan for peace and prosperity in the Asian sphere of influence. In normal circumstances, Chinese bullying is sufficient to cause other nations to come to heel, but the North Koreans aren’t listening. An above ground hydrogen bomb test over the mid-Pacific is clearly NOT in China’s interest.