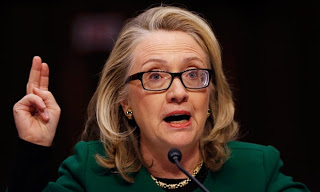 Facebook
Twitter
Pinterest
WhatsApp
The Obama Administration says that everything is out in the open and “what does it matter” anyway. However, there is still the matter of CIA employees who have yet to testify before Congress after all this time. What’s going on with that?

(Washington Free Beacon) A CIA employee who refused to sign a non-disclosure agreement barring him from discussing the Sept. 11, 2012 terrorist attack in Benghazi, Libya, has been suspended as a result and forced to hire legal counsel, according to a top House lawmaker.

Rep. Frank Wolf (R., Va.) revealed at an event on Monday that his office was anonymously informed about the CIA employee, who is purportedly facing an internal backlash after refusing to sign a legal document barring him from publicly or privately discussing events surrounding the Benghazi attack. (read more at the link above)

The CIA declined to comment directly on Wolf’s charges, but forwarded theWashington Free Beacon a letter sent to Congress from CIA Director John Brennan in which he denies charges that the agency has forced employees to sign NDAs and submit to polygraph tests.

As anyone who has had anything to do with CIA understands clearly, they polygraph the heck out of you. Director Brennan is an Obama Administration confidant of some long standing and one can expect that he will be ‘onboard with the program’.
USGOV has classified every little sordid detail that has to do with the Benghazi Scandal to the point where nobody can tell what happened — unless they want to spend the rest of their lives in prison. The Obama Administration and the Democratic Party have a lot to lose if it all becomes public. Hillary Clinton, heir apparent to the Democratic Presidential chair, can’t become Leader of the Free World if it all leaks. There is a reason why she and the Obama Administration went to such great lengths to cover it up.

Republicans in the House Oversight Committee reportedly plan to issue subpoenas if Kerry does not reverse his decision and provide congressional investigators access to Benghazi survivors.

Am I the only one who finds it curious that Congress DID NOT put Secretary Clinton under oath before she testified “what does it matter” before the committee investigating the Benghazi Scandal? Hillary is no fool. She doesn’t want to face perjury charges the way that her husband, Bill, did when he said, “I never had sexual relations with that woman.” There is a metaphorical blue dress out there with Hillary’s name on it.