Will the US send troops to Mexico? 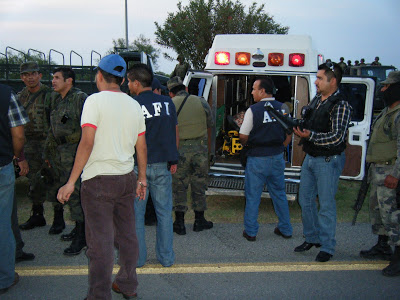 Mexican Narcotics Agents Prepare for a Raid (photo by author)
The cartel wars in Mexico that threaten to spill across the US Border in a far greater way than they have to date are causing some, including Texas Governor, Rick Perry, to suggest that US Military intervention may be one possible answer to the situation. Last week he spoke in San Diego, CA and said, “You have a situation on the border where American citizens are being killed. I think we have to use every aspect of law enforcement that we have, including the military. I think you have the same situation as you had in Colombia. Obviously, Mexico has to approve any type of assistance that we can give them.”
To date the only SIGNIFICANT thing that the Federal Government has done for the Border States is to sue them. I know that the Secretary of Homeland Defense crowed about sending a few hundred National Guard troops in “support”. Support consists of them monitoring video cameras. Some people say that’s simply not enough and I agree. The Federal Government has held that the border security concerns of American citizens are simply the product of racial bigotry and bias. Unfortunately they have misread the situation completely.  Department of Homeland Security’s Janet Napolitano, told Perry that if he wants border protection, it’s up to him to pay for it with Texas National Guard troops. Is she saying border protection isn’t her job?
The Obama Administration hopes to add 20 million illegal aliens to the voter rolls and taking a national security stand on the Mexican problem would tend to throw that dream of 20 million additional Democratic Party voters off the rails
Mexico can not report the actual death toll from the cartel wars. The Mexican government puts the number at 31,000. I don’t think that they or anyone else knows what the real numbers are, but insiders suggest that it’s far more – well up to and possibly exceeding 100,000. Large areas of Mexico are under the total control of drug cartels and the Mexican government is not capable of dealing with the corruption and violence. The Mexican Army and Navy do the best they can — but it’s not enough. A new Mexican president will take office in 2012 and there are hopes that will herald a return to the old ways where the Mexican Army “managed” narcotics trafficking. That’s not going to happen. The genie is out of the bottle/the blush is off the rose.
“Broken Neighbor, Broken Border” (LINK), a House Immigration Reform Caucus document was released November 20 (2010). It paints a bleak picture of the situation in Mexico. What will the Obama Administration do about it? Don’t hold your breath. (download HERE)
Will US troops eventually be requested to eliminate narcoterrorist control of Mexican States? Only time will tell. For now these are the legislative recommendations made by Broken Neighbor, Broken Border: