Why I am a Climate Denier 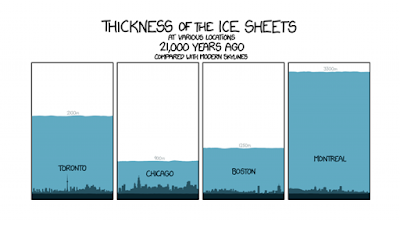 Facebook
Twitter
Pinterest
WhatsApp
If you were to ask Barack, he’d confirm for you that he’s the smartest man in the room. I think that what Barack’s trying to say below is, “The weather is changing”. He blames human activity alone. I suggest that the weather and the climate is far more complicated than that. There is an agenda at work when progs shout down anyone. What might that agenda be? The US spent $100 billion over the past 8 years to fight global warming. A lot of people got rich at taxpayer expense.

Despite his rants, I think that he’s wrong (again). Barack has been wrong about — everything — so consistently that calling him out is easy, unless you’re the corrupt elite press or an academic prog. If you want to be on the right side of history, an easy cheat is to just move opposite of whatever Barack says.

During the last (Quaternary) glacial maximum 20,000 years ago, 2-3 mile thick ice sheets spread over much of North America including Barack’s beloved City of Chicago. (global cooling). Prior to that, North America was a vast swamp (global warming) where dinosaurs and plants were later turned into oil and coal over time.

The Quaternary glaciation was the last of five known glaciations during Earth’s history. The other four are Huronian glaciation, Cryogenian, Andean-Saharan glaciation, and Karoo Ice Age.

Theories for causation of these ice ages (and the intervening periods of global warming) include changes in atmospheric composition, changing ocean currents, astronomical cycles and plate tectonics. Oddly, changes in the climate took place without the presence of mankind to interfere with them.

I know. It’s so unfair to bring up inconvenient facts, Barack. Who knows, maybe I’m Islamophobic or something like that to point these things out here on Virtual Mirage.

At present it is difficult to tell whether or not the globe is warming, which is why the mantra changed from “global warming” to “climate change” (i.e. the weather). It’s equally difficult to tell if the globe is warming, what role mankind may have to do with that.
Since Barack and the progs have urged other progs to denounce climate deniers, I’m self-denouncing as I make an effort at clarification.
The “science” of global warming is far from settled. The move from that stand to the war on the weather (climate change) is suspicious in the extreme. Making the military’s primary mission the war on the weather made the Obama regime a laughing stock everywhere but in the corrupt elite press. Even the CIA was forced to get onboard with this myth, creating reporting requirements that would only support (never deny) that mankind was the reason that the weather changed. They were co-opted even more than the military was, but it’s a secret.
All of the “green energy” companies that received billions in loans from the Obama regime (and then defaulted when the businesses went under) were key contributors to Barack’s campaign fund, to the Presidential Library (and monument) fund, etc. Scam? You be the judge.

Al Gore and his business partners had “serious reservations” about selling Current TV to Al Jazeera, but ultimately overcame them because they believed the U.S. was likely to influence the Qatar-backed broadcaster more than the other way around, according to court papers.

Al Gore scored $500 million for selling his “green energy” company, which the oil sheiks promptly closed. Not bad work if you can get it.