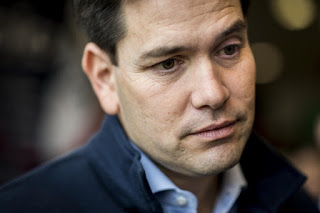 Facebook
Twitter
Pinterest
WhatsApp
I don’t dislike Marco Rubio. He became a bit mean spirited and the electorate responded negatively toward his campaign to be leader of the free world.
I know people who predicted that Rubio would be the 45th President of the United States and who have been devastated by his failure. Donald Trump beat Rubio by over 20% in his own state of Florida where he is a sitting senator…but not for long, from what I’m told.
I don’t hear much from Rubio these days, I don’t hear much from Jeb! either. Rubio needs to work to put bread on the table and Jeb! was born with a silver spoon in his mouth so he doesn’t. Since Rubio makes a living by being fabulous, you’d expect that he’d be out there in Ted Cruz’s wake, trying to pick up table scraps and possibly a vice presidential slot.
Rubio hasn’t pledged his delegates to Trump (yet), but I think that he’s waiting to see which way the wind blows. Right now, it might be his best bet to get a job in the new administration, since I don’t think that being re-elected to the US Senate from a state that slapped him down like an unwanted stepchild, is likely. The rumors of Rubio’s potential homosexual past shouldn’t stop him from serving in a Trump administration, but it might not work for Cruz? I don’t know whether or not Rubio cruising a gay park with a guy who opened a gay porn business makes him gay or not. You can decide that. Somebody should run it past TrusTed.
What do you think? Could Rubio serve as the Secretary of the Interior, Secretary of Commerce or a similar post in the Trump Administration in exchange for delegates?