Where is Charles Martel? 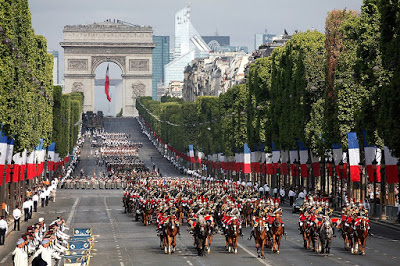 A large truck drove into a crowd of people who had gathered for a Bastille Day (July 14) fireworks show Thursday in the southern French city of Nice, killing at least 30 people and injuring 100 more in an apparent terror attack, officials said.

A police official told France’s BFM TV that the driver of the truck was also dead. A witness, Wassim Bouhlel, told the Associated Press that he saw the truck drive into the crowd, then witnessed the driver emerge with a gun and start shooting.

“There was carnage on the road,” Bouhlel said. “Bodies everywhere.”

A friend from the Norwegian Intelligence community (Nasjonal Sikkerhetsmyndighet) dealing with counterterrorism, texted me when the news broke and asked me who I thought might be responsible. I suggested that the most likely suspect would be a Lutheran-Norwegian who was also a police officer on vacation in France. After all, Norway never joined the EU.

Norway is proud of having expelled hundreds of Muslims persona-non-grata (PNG). My feeling is that they are about to expel more. The non-official view is that they’d be ecstatic to create a Muslim-free country, since the Muslims inevitably bring terrorists, organized crime and socially unacceptable behavior (such as rape) to a country that doesn’t want it.

The Europeans are very tired of the sand monkeys who have arrived from their cesspool regions to create terror and rape. The European media is naturally skeptical and keeps beating the drum that the governments need to suppress white people who might take exception to having other white people killed by Muslims on killing sprees. The handwriting is on the wall with this one. If the existing governments don’t deliver on handling the problem, they will be voted from office. (Do you hear that Barack and Hillary? There only so many dead people who can vote in any given election.)
Naturally as an American with a leader who has significant roots both in the Muslim world and the communist movement, I blame white people as well, for Muslim savages going on murderous rampages.