What do Wisconsin VOTERS want? 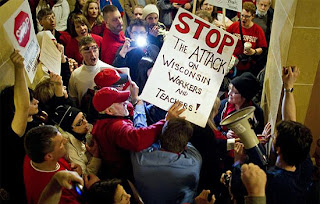 The public employee unions have been strident to the point of shrillness in their demands to keep their (the union’s) political lives going. The truth may be that the teachers and others will get a better deal in the long run without the unions bleeding their members and the state white, but we can’t really argue that because nobody can predict the future.
A Rassmussen Report (LINK) out suggests that the voters favor spending cuts to tax hikes. Ultimately this is where the power rests. You can read the results for yourself, but in summary, households earning under $60K/year favored only spending cuts and those earning over $75K/year favored a blend of spending cuts and tax increases.
Where does this leave the teachers (representing the most vocal portion of the union represented public employees)? I FAVOR better pay and more accountability for teachers as a general rule. That’s my bias. I believe that making the public sector more professional, making those jobs attractive to the best and brightest, etc. is a GOOD THING. It makes the country stronger and makes the system work better.
But what happens when the government can’t pay its bills during a recession (in some parts of America) or depression (in other parts)? There are a lot of companies that have gone out of business and there are a lot of people and companies who are close to the edge. The Wisconsin voters can accept higher taxes to insure that teachers get ‘free’ benefits and a princely wage – or they can decide that some compromise is in order.
Ultimately it’s up to them.