Home Blog Post Office of Bil...
Facebook
Twitter
Pinterest
WhatsApp
In BLOODY MEXICO: A Novel of Cartel Wars, the Office of Bilateral Implementation in Mexico city received mention more than once because characters in the story interacted there. There has been a lot of talk in Mexico and in the US, suggesting that it is a ‘nest of spies’ or that its presence represents a significant increase in US clandestine interest in Mexico.
Established by the Merida Initiative, OBI/BIO (depending on your pleasure the acronym still means the same thing) provides a fusion center for US and Mexican relations in their ongoing efforts to stem the flow of illegal narcotics products through Mexico and into the United States. It’s not a spy agency. 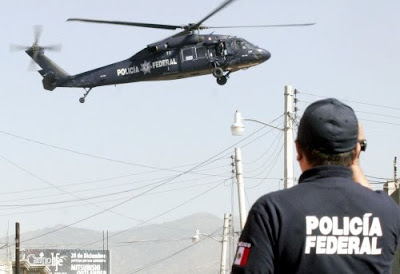 The office assists the Mexican government through funding equipment purchases and in other technical measures used to combat the narcotics cartels. 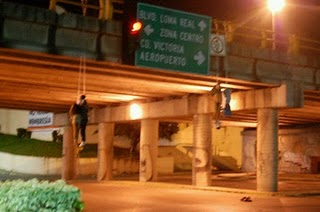 The predatory and violent drug cartels continue their reign of terror in Mexico and it only makes sense that the US would take appropriate efforts to support their allies to the extent they are able and to the extent that the Republic of Mexico requests it. In the photo (right) three people hang from a freeway overpass in Ciudad de Tampico, Tamalupas.
It’s not at all uncommon to stumble across hanging corpses at overpasses, though the Mexican Army and Marines (Naval Infantry) work diligently to cut them down when and where they are found.