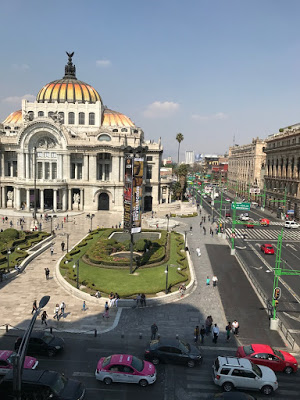 Facebook
Twitter
Pinterest
WhatsApp
Somewhere around 70% of the heroin that makes its way into the US is grown in Guatemala and Honduras. Most of the rest is grown in Southern Mexico. It was easier for narcotics cartels to establish the cultivation of opium in Guatemala/Honduras because of the vast poverty in those areas. The governments of both Guatemala and Honduras are unwilling to do anything about it because it brings wealth to these poverty-blighted areas.
To a lesser extent that’s also true regionally in Mexico even though the national government would like to do more. The more they do, the greater poverty in already poor areas – and the greater the political instability.
The challenge for the Trump Administration is to walk a tightrope with Mexico and Central America (not unlike the one faced by previous administrations).  No matter, the drug problem in America won’t be solved until Americans stop buying illegal drugs.
Libertarians agree with the legalization of all street drugs, arguing that it would solve the problems of warehousing people convicted of narcotics-related offenses. The question always comes back to “who will pay”. Addicts currently rely on a generous welfare system to support their maintenance (food stamps, welfare, aid to dependent children, etc.) If you take that away, crime will increase. Libertarians are not fond of the concept of radically expanding the police to protect one group of haves from have-nots.
I’m not proposing a quick fix here. This is only a blog, throwing a few strands of spaghetti against the wall, and watching to see whether any of it will stick.
Manufacturing Heroin
Papaver somniferum is one of the few species of poppy that produces opium. The flowers are colorful and vary in hue. Once they fall away, a green pod remains, which continues to grow. Opium alkaloid is only produced during the terminal ripening process, which lasts about two weeks.
While the fruit is still on the stem, incisions are made in the sides of the pod. Common practice requires the sap to seep out of the pod overnight for collection each morning for (roughly) the ensuing week.
Raw opium is converted to morphine base through boiling. The raw sap that was collected from the plant pod dissolves in boiling water and any obvious impurities such as plant fibers are scooped from the liquid opium. Quicklime is mixed with water and is then added to the boiling liquid opium. The morphine alkaloid reacts with the lime and impurities precipitate to the bottom of the pot. The liquid is poured through a filter into another container and ammonia is added and the mixture is heated. As it heats, the morphine solidifies and precipitates to the bottom of the pot. The liquid is separated off from the solid and what remains is #1 Heroin or morphine base.
The next step in the purification process necessary to create a usable narcotic requires acetic acid to combine with the morphine base. The mixture is heated to 85 degrees centigrade for two hours. This process chemically binds the morphine to the acid and creates chemical heroin.
Water us added to the chemical heroin and since heroin is water-soluble it becomes a solution. Common sodium carbonate is added to the heroin solution and the precipitate is taken from the bottom of the pot. That is #2 Heroin or heroin base.
From heroin base the manufacturer can make #3 Heroin (20 to 30 percent pure), often called brown heroin, Mexican heroin or smoking heroin. It has the general granular consistency and color of (unrefined) brown sugar. To make #3 Heroin, hydrochloric acid and caffeine are mixed with the heroin base and stirred until it dries. It is also referred to as “black tar heroin”, essentially crude #3 Heroin with more impurities in it than is typically found in #3 Heroin. The impurities make the drug more toxic but occasionally add a more potent effect (depending on who made it).
In order to make #4 Heroin from heroin base, hydrochloric acid and ether are added. The process is complex, toxic and hazardous because of explosive fumes. Once the heroin base passes through this process, it’s usually around 90 per cent pure and is referred to as China White. China White (or #4) Heroin is a fine white odorless and colorless powder.
(Excerpted from Appendix 2 – White Powder, a novel by Larry Lambert (re-printed here with the author’s permission)