Weiner: Where is he Now? 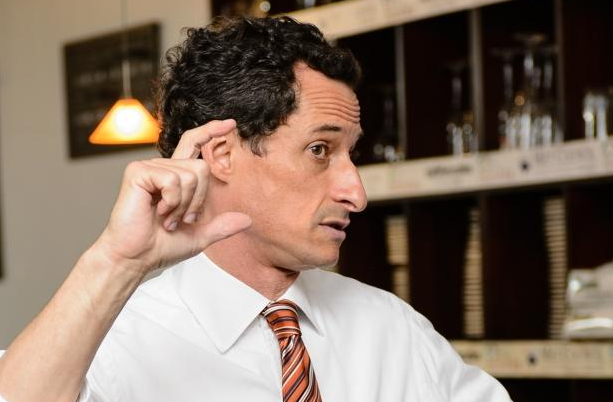 Facebook
Twitter
Pinterest
WhatsApp
You all remember Anthony Weiner, member of the US Congress from NY 9th District who was shamed from office because he sent pictures of his penis to women under the pseudonym “Carlos Danger” almost continually — including when he was sitting in Congressional hearings and should have been paying attention. You may recall that following his 2011 resignation from Congress that he ran for Mayor of New York City, losing out in the primary on September 10, 2013 with a bit over 4% of the vote.
Anthony Weiner is married to Huma Abedin Weiner, a longtime personal aide, and some opine, lover  of US Presidential hopeful, Hillary Clinton. The happy couple married in July 2010 in an interfaith ceremony with former President Bill Clinton officiating. In December 2011, not long after Weiner resigned from Congress, Huma gave birth to the couple’s first child, Jordan Zain Weiner.
WHERE IS HE NOW?
We have to rely on rumor control, and that suggests the following: Anthony Weiner is keeping a low profile, working for his wife’s best friend, Hillary Clinton, giving advice and support in her yet un-announced run for the US Presidency.

Some cynics (yes you know who you are, Libertarian Advocate) suggest that Weiner has not been embraced by the Clintons since he sent photos of his penis to many hundreds of women and it (the penis) made the talk show circuit. To say that would be to suggest that the reptilian, post-menopausal Hillary Clinton doesn’t have a warm, charitable and forgiving nature. Any questions in that regard should be forwarded to Vince Foster, Clinton attorney and long time friend of Hillary.

Huma Weiner is caught up in the Hillary Clinton e-mail scandal because when she worked for the State Department under then SECSTATE Clinton (also known as the Bitch of Benghazi), she used the e-mail server in the Clinton’s private residence rather than the official US State Department e-mail the way that the proles are required to. But what of Anthony? Was he using the clinton.net server for his current sexting activities? We will need to wait for the Congressional review before we will know for sure.
A FUTURE FOR WEINER?
It would seem that his future in politics pivots on Hillary Clinton’s level of success politically. If she wins the election, there is always the possibility that Anthony Weiner would be appointed to be ambassador to Sweden or Norway while Huma remains close to Hillary’s hip.
In the city that reared Weiner, he can’t get more than 4% of the popular vote in the mayoral primary. His prospects for elected office seem distant…but an appointed post is quite another thing. And at the same time, President Hillary Clinton will want him kept as far as possible from Huma.
Huma Weiner’s close family ties to the Muslim Brotherhood are exhaustively documented, but does she have the stroke to find her Jewish husband a job with ISIS (keep in mind that Barack Obama has stressed that ISIS is beheading people for lack of employment – would sending Weiner there help the matter)? I don’t know the answer, I’m only asking the question.

I think that it may be Weiner, himself, out there on the stump, that will help voters understand Hillary Clinton’s platform and programs better than possibly any other staffer.

Yes, he’s argumentative and, yes, he has a checkered past, but America loves a reformed pervert every bit as much as France or Italy does. With the success of the feature film, “Fifty Shades of Grey”, there may be a place for Anthony Weiner on the road with Hillary 2016 that wouldn’t have otherwise been available to him.