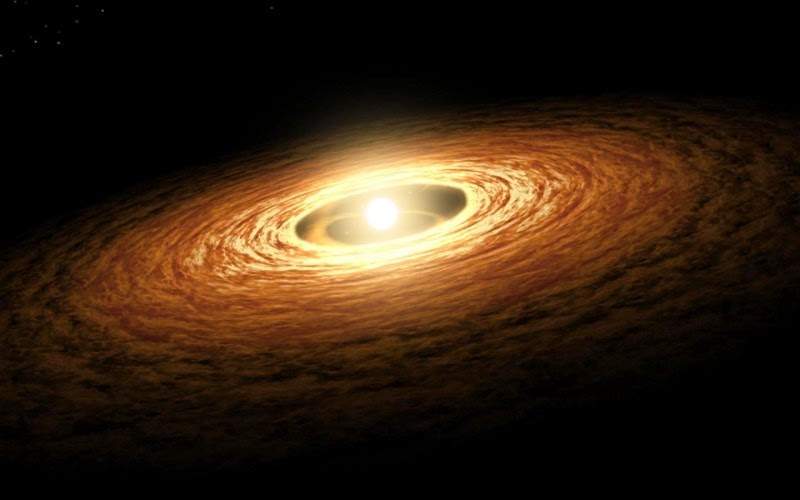 Facebook
Twitter
Pinterest
WhatsApp
I don’t think that many of you will care, but I am a science geek at heart, so I think this is interesting.

The elements that later went on to constitute the major ingredients in life on Earth — such as carbon, oxygen, nitrogen and hydrogen, originated as volatile gases in the protoplanetary disk when the solar system was less than 10 million years old. If you want to understand how those elements contributed to the creation of Earth as we know it, you need to understand where they occurred during the time that the Solar System formed.

The rocky planets, Mercury, Venus, Earth and Mars formed at roughly the same time and in roughly the same way. Meteorites called chondrites, which are thought to be the most primitive leftovers from the birth and infancy of the solar system about 4.6 billion years ago. They derive their name from their main component — chondrules, which formed as molten droplets floating in space, melted by massive shock waves that blasted through the early solar system. We can tell that happened based on magnetic residue in the chondrules that tells the story like rings on a tree.

Enter the latest information:
Led by Kelly Miller, a doctoral student in the lab of Dante Lauretta, the principal investigator of NASA’s OSIRIS-REx mission, the team has found evidence of minerals within meteorites that formed in an environment that was enhanced in oxygen and sulfur and date from a time before the particles stuck together, or “accreted,” to form larger bodies such as asteroids and planets. Specifically, Miller and her co-workers studied sections about half as thin as a human hair that were cut from R chondrites, a rare type of meteorite so named after the location where the type specimen fell: Rumuruti in Kenya. R chondrites are thought to have formed somewhere between Earth and Jupiter. In one specimen, found in Antarctica, they discovered a new type of building block called sulfide chondrules. The samples were obtained from the U.S. collection of Antarctic meteorites — a cooperative effort among NASA, the National Science Foundation (NSF) and the Smithsonian Institution.

“Generally, chondrules are made up of minerals rich in silicon, but the chondrules we found in this meteorite are completely different in that they are composed of sulfide minerals,” she explained. “This suggests that they formed in a region that was rich in sulfur, and provides evidence for a previously unknown type of environment in the early solar system.”
To learn more about the early stages of the solar system including the origin of the building blocks of life and water, the University of Arizona-led OSIRIS-REx mission is getting ready to launch a robotic spacecraft to asteroid Bennu in 2016 and bring a sample of at least 60 grams of pristine material back to Earth for study. The mission will provide ample amounts of sample material and, most importantly, from a known context.
“Unlike with meteorites that came to us serendipitously and we’re lacking the context of where the material formed, with OSIRIS-REx we will know exactly where that piece came from, and we will know the travel history of Bennu — where it has been in the past,” Miller said.