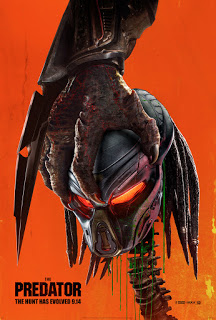 Facebook
Twitter
Pinterest
WhatsApp
What to do for entertainment on a weekend? It was one of those Saturdays yesterday and I wanted to see humans take out illegal space aliens. I started out by watching a hot blonde woman kick some illegal alien butt in a made-for-You-Tube video in Hybrids. Six minutes and fifty-two seconds of action was good, but not nearly enough. Eleven minutes of Lunatique…where a hot brunette goes  hard in a dystopian future…in France. Because it’s a French film there’s a bit of nudity and things end as most French films do.

And then I had a piece of peanut butter an cherry jam toast. Then six minutes and fifteen seconds of an alternate scene from Aliens where a hand full of Colonial Marines gear up to take on eight hundred aliens. “An express elevator to hell – going down!”
The mail arrived – all bills. More escape was called for.
Then, I went to see The Predator in its second day of general release. Even though I’m a Predator fan, I find it hard to give it more than 4 of a possible 10… get to the choppa… No spoilers, but it wasn’t on par with previous films that the franchise put out. It was a bit more light hearted, and as one who likes the movies in general, there were lots of references to previous films. I’m glad that I was viewing the film on the big screen to get all of the cool CGI effects.
If you don’t like sci-fi, you’ll count it as about four hours that I’ll never get back again. If you enjoy sci-fi, you might say the same thing. But it was fun in its own way.