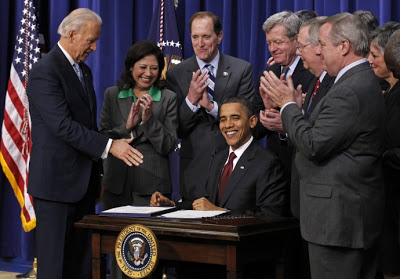 The Obama Administration didn’t exactly pop into being, propelled by a brain trust of the best and brightest. I felt that the “summer(s) of recovery were a joke when Obama put poor old senile Joe (Slow Joe) Biden in charge of “jobs”, “the recovery” and so forth. It’s like putting your your sister’s retarded step-child in charge of balancing the company’s books because you’re too cheap to hire somebody. It doesn’t work. It can’t work.
The Democratic controlled legislature didn’t even to bother coming up with budgets for the past two years, ‘deeming’ whatever they spent to be ‘the budget’. I find it amazing that there are still Democrats who vote for them. Or are we going to define Democrats in future elections as – unemployed people receiving princely benefits, members of labor unions and those racially attuned to the president? With the number of unemployed, Obama might win the next election given those criteria.
The problem is that the people in charge are socialists. Their view of what the nation needs has nothing to do with what the nation actually needs.

(Reuters) The latest jobless numbers showed just 117,000 jobs were created in July, a number that — like this year’s GDP data — probably will be revised downward. Official unemployment, not including job seekers who have just given up, stands at 9.1%. The participation rate, which measures the percentage of people working or searching for jobs, fell to 63.9%, the lowest in 27 years.

This weekend, the president is off to Camp David for more birthday celebrations. I didn’t have the opportunity to wish him birthday greetings personally (this blog will have to suffice). 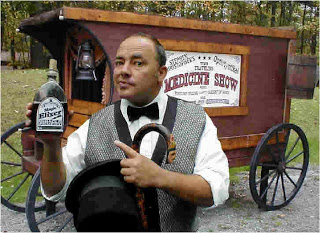 MEANWHILE, Obama’s chief apple-polisher (and future Democratic Party Presidential Hopefull), Rep. Debbie Wasserman-Schultz assures all of us that the economy has turned the corner. Beat that drum hard, Rep. Wasserman.
Sidebar: Debbie Wasserman-Schultz always reminded me of a female version of former congressman Anthony Weiner. But since she hasn’t texted me with photos of her unappealing nude frame, it remains to be seen whether she delivers the goods the way that Weiner did.
A few friends who read this blog (and you know who you are) called me and asked me where the stock market is heading. I give free advice so they get their money’s worth – and I suggested that with rising interest rates a foregone conclusion that housing prices would be going down as people are less able to afford even the cheap homes on the market today. And housing starts (lowest since 1948) are a good economic indicator in America.  The only real question is whether unemployment will be higher than 10% when the elections roll around next year. 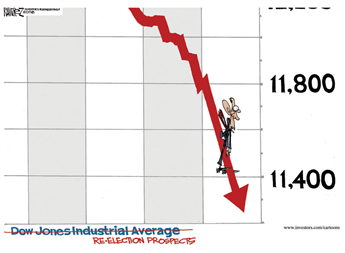 However, unless/until the Republican Party finds somebody to run for President that the public has the slightest degree of confidence in, Obama could still possibly be re-elected in 2012.
And to friends vacationing in Chicago this weekend – we need a report on the mood in the streets from Obama’s City.
###