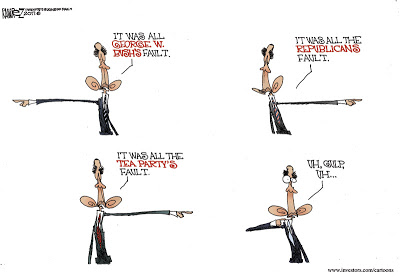 Facebook
Twitter
Pinterest
WhatsApp
Some call Obama clueless. Others think that he’s simply obtuse. And it’s tough to know whether it’s an act or if he can really possibly be as stupid as he pretends to be.

He tried to calm the stock market today and failed miserably because he made it clear that he’s completely out of ideas on how to build the economy, grow jobs and get us out of the morass that he and the Democratic Congress planted us in. After his remarks the market fell an additional 5.5% (to 6.9%).
He played the class-envy card suggesting that heavier taxes on the sector that creates jobs would spur more job growth. That certainly inspired the stock market. He wants to spend more on roads in his third “summer of recovery” but we lost 330,000 jobs last year between June and September when his ‘recovery’ program was in full swing. The shovel-ready jobs never appeared. Obama also wants to extend unemployment benefits from two to three years. Now there’s a plan to spur people to find work. Many people find that they make more on unemployment than they’d make working. Does anyone think it would spur the economy to keep the unemployment payments flowing for a third year? He also wants to extend the temporary payroll tax cut that didn’t do anything to improve the economy. That’s it – and it’s why the markets continued to tank.
Yes there are culprits – the evil fifth column, called The Tea Party – those radical people who demand that the government not borrow more than it can afford to repay.  If it wasn’t so absurd, I’d think that it was a Saturday Night Live skit.