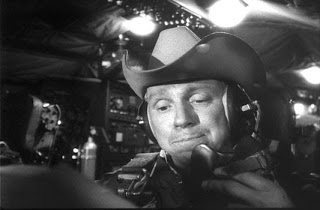 Dr. Strangelove (or How I learned to stop worrying and love the bomb) came out well before I joined the military. The Slim Pickins check list always tickled me and I thought about it every time I did the inventory on a survival kit. Particularly gold. The load-out varied but there were usually half a dozen one ounce gold coins (worth more now than then). There was never a combination Rooshan phrase book and Bible.
Yes indeed, a fella could have a great weekend in Vegas with all that stuff.
However, I must admit that General Buck Turgidson (George C. Scott) and his “secretary”, Miss Scott were my favorite characters in the film. In fact, becoming Buck was the main attraction to me for making flag rank. I never made flag rank…and more’s the pity.

President Merkin Muffley: General Turgidson, I find this very difficult to understand. I was under the impression that I was the only one in authority to order the use of nuclear weapons.

General “Buck” Turgidson: That’s right, sir, you are the only person authorized to do so. And although I, uh, hate to judge before all the facts are in, it’s beginning to look like, uh, General Ripper exceeded his authority.

General “Buck” Turgidson: Mr. President, if I may speak freely, the Russkie talks big, but frankly, we think he’s short of know how. I mean, you just can’t expect a bunch of ignorant peons to understand a machine like some of our boys.

Truth be told, there are hundreds of quotes from the movie that tickle my funny bone. The “deviated preverts and the Coca Cola Company” make me laugh every time I hear it. The court of inquiry will give you such a pranging…

Essence of Purity
Purity of Essence