Facts, previously unknown are coming to light as reported by the Daily Mail and the left wing blog, Huffington Post that suggest that the radical Islamic Terrorist Osama bin Laden had his own marijuana crop growing both in and adjacent to his luxury compound in Pakistan.

“Said to be worth $1 million (though that estimate is now hotly debated), the home of the world’s most feared terrorist has attracted crowds of Pakistanis and media to its now sealed-off gates. But a stroll around the 20-foot-tall, barbed wire-ringed walls led CNN’s Nic Robertson to the cannibis crop, barely hidden alongside a garden of cabbages and potatoes.” (Huffington Post op cit)
“High-strength marijuana plants have been found just yards from the luxury home of slain terror chief Osama Bin Laden. Hundreds of the exotic green flower have flourished for a number of years on the border of the war lord’s secret compound in Abbottabad, Pakistan. Despite being a short walk from a military training academy dubbed ‘Pakistan’s Sandhurst’, the illegal crop had remained undiscovered.” (Daily Mail op cit) 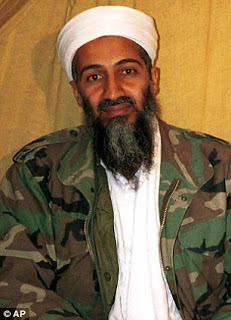 Did Osama bin Laden smoke marijuana recreationally? Did his terrorists sell the marijuana harvest for profit to keep the compound and its large staff going? Isn’t that against Koranic Law? Doesn’t that violate the most basic tenants of Islam?
According to a report filed by Bloomberg, two lackeys who called themselves Akbar and Rashid Khan and did the daily shopping for the terrorist compound, speaking Urdu in the Pashtu-language accents of Waziristan, a region on the Afghan border. “The grocery basket included extensive supplies of Pepsi and Coke – U.S. brands that have become the face of western commercialism that Bin Laden claimed to despise.” Grocer Anjum Qaisar, 27, who works 150 meters from the compound, said, “Bin Laden’s men never came by foot, they always drove a Pajero or a little Suzuki van, and they bought enough food for ten people.” Mr Qaisar said that he did not know who lived inside the building. “I was curious about why they bought so much food, but I did not want to be rude by asking.”
No eye witness accounts of bin Laden’s men trading narcotics for food and staples has yet been filed by any of the news organizations on the scene but since they are growing marijuana, we expect that those reports will eventually filter in. At least we now know why he has that goofy smile on his face (above right)…he’s high.

I guess Muslim clerics know how to party in Pakistan.