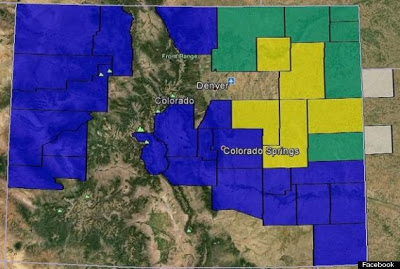 Facebook
Twitter
Pinterest
WhatsApp
The 51st State Initiative is potentially only a symbolic gesture, but it expresses just how divided Colorado is (and much of the US is) because of policies being undertaken by the present administration in the state capitol and by extension, on the national stage.

Meanwhile, back in Denver, the bitter governor, John Hickenlooper, lashes out at citizens who are pushing for recall elections for Democratic state senators who followed him like the lemming that they are. (READ MORE HERE)

The Colorado Governor went on to suggest that the elections are merely attempts by a radical few to “intimidate and punish a select number of Democratic legislators for daring to vote their conscience”. Well. . . I guess facing the discord of a gun owning public certainly could be intimidating. Oh, and let’s not forget that more people signed the petition to recall John Morse (one of the two State Senators who are currently facing recall) than originally voted him into office. Is the Colorado Governor really suggesting that legislators should be free from reprimand as long as they feel that they voted “their conscience”?