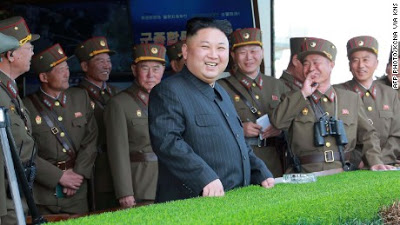 Facebook
Twitter
Pinterest
WhatsApp
North Korea
North Korea published an official comment about relations with South Korea and with the US. The Korean Central News Agency (KCNA) published an English-language commentary on 21 Wednesday that read a “dramatic atmosphere for reconciliation has been created in relations between the North and the South of Korea and there has been a sign of change in the DPRK (Democratic People’s Republic of Korea –North Korea) -U.S. relations.”

I don’t know whether the rapprochement is sincere or not. I don’t think that anyone knows at the moment. However the US is going ahead with scheduled military exercises beginning April 1, and sanctions are still in place. I don’t think that China will blink and lift them and that may have the attention of the Norks even more than what the US and its allies have done.
The commentary on improving relations coming out of North Korea is without precedent and important as an acknowledgment of a change in North Korean tactics, if not policy. North Korean media have published nothing else like it, according to an analysis posted by the Daily NK on 20 March.
Putting their Snouts Under the Tent
The Russian Far East Development Ministry announced on 20 March that a delegation led by its minister, Alexander Galushka, is now visiting Pyongyang.
The delegation is scheduled to meet with North Korean External Economic Affairs Minister Kim Yong Jae on 21 and 22 March to exchange views on cooperation in the fields of energy, agriculture, forestry, fisheries, transportation and science technology.
This is vintage Russian behavior whenever North Korea reaches out to South Korea and the US. The timing is perfect.
The Russians tried to shoehorn themselves into the Agreed Framework arrangements during the Clinton administration and were one of the parties in the Six Party Talks. The distinguishing features of Russian involvement were that they never committed resources or finances, but always had much to say.
Russian meddling has important implications. It means that the Russians see opportunities for increased influence at no cost to them by pretending to be friends with Kim Jong Un’s regime.
They also see opportunities for possible financial gain, for example, from a relaxation of sanctions as a reward for improved relations and eased tension. The Russians also appear to be trying to position themselves to capture a larger share of the North Korean energy market, at China’s expense. Russian fuel smugglers are competing with Chinese smugglers for North Korean customers.
Russian intrusion, such as this, is a positive indicator. It implies that the leaders in Moscow have concluded that the North Korean outreach is at least superficially genuine and will last for a while.
Turkey-Syria
News services reported that Turkey intends to create its own local government authorities in Afrin District, replacing the councils created by the Kurds. One of their tasks will be managing humanitarian assistance.

Syrian Kurdish sources reported that the Turkish proxy forces, the Free Syrian Army, is capturing the remaining parts of Afrin District. They also are preparing to attack the Syrian Kurds at Tel Rifaat, which is the only sizeable town left in the region.
The People’s Defense/Protection Units (YPG) withdrew from Afrin to Tell Rifaat and to Manbij. Tell Rifaat is reported to be no longer a Kurdish-controlled town. In late February, the YPG supposedly surrendered control of the town to Syrian government forces. The Turkish-backed Free Syrian Army has had limited contact with Syrian-backed forces. When incidents occurred, the Syrians retaliated forcefully.
Bitterness among the Kurds.
The Syrian Kurds said they feel that they have been stabbed in the back by the US and the international community. “The silence of the international community is complicit in the macabre plan of Erdogan. Silence means acceptance,” a group of Kurds originally from Afrin and now living in Europe told the French daily Le Monde on 20 March.
“Don’t abandon your allies!” they said. “The same fighters who fought courageously against Daesh (the Arabic acronym for the Islamic State) are today left to the mercy of the Turkish army,” said Khaled Issa, the official representative in France of Syria’s Kurdistan. “What is happening in Afrin is ethnic cleansing and the great powers are spectators,” he said.
The Usual Searing Analysis
The Kurds in Afrin chose defeat by the Turks over compromise with the Sunni Arabs and the Alawite Arabs. Syrians and Russians tried, but failed to persuade the Kurds to accept Syrian authority with the prospect of armed assistance. The rest of the Kurds talked about coming to the aid of Afrin, but did not, most likely on outside advice (from the US). They stopped at Manbij.
The Syrian Kurds did not learn from the experience of the Iraqi Kurds in the independence referendum in September. Somehow, they believed that their version of autonomy within the Syrian state would be acceptable to the Damascus government and to the Russians. It was not.
No country with a large Kurdish population will permit the emergence of an independent Kurdish state. That Kurdish dream of statehood is dead for another generation.
President Trump did the right thing by keeping the US out of the fighting. The US forces in the general area are mopping up ISIS and have advised the Kurds to make friends from the national forces in Syria and Iraq, respectively or to accept that they are fighting a war they can’t win. The US is not interested in fighting a proxy war against Turkey or anywhere else in the Middle East. That is a change in approach from the Bush and Obama years.
Israel

Israel officially confirmed on 21 March that Israeli air forces destroyed the Syrian nuclear reactor in 2007. The announcement said the air strikes removed a major threat to Israel and the region and was a “message” to others.
The Israelis released declassified materials related to the attack. They included photographs and cockpit video of the moment that an air strike destroyed the Al-Kubar facility in the desert near Deir ez-Zur. The facility was located more than 480 km (300 miles) inside Syria. “This was our message in 2007, this remains our message today and will continue to be our message in the near and distant future.”
The message is a warning for Iran. Israeli air strikes have destroyed at least two suspected Iranian facilities in Syria. All parties are on notice that the attacks on suspected Iranian facilities will continue.
North Koreans were building the nuclear reactor complex at Deir ez-Zur when it was attacked in 2007. The main buildings were copies of those at the North Korean complex at Yongbyon.