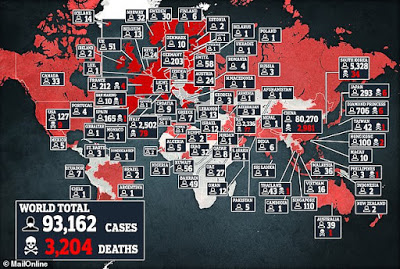 Facebook
Twitter
Pinterest
WhatsApp
There’s a lot of politics being slung around when it comes to the coronavirus. It will only intensify as people make runs on toilet paper at Costco and empty the shelves of water bottles, and as the stock markets bounces like a yo-yo, losing and gaining a trillion here and a trillion there.

One of my early concerns was that COVID-19 would mutate and based on research, that happened. There is COVID-19L, which is more aggressive, and COVID-19S, which is a milder infection and looks more like the flu that we’re familiar with. (more here)

Researchers say there are now two types of the same coronavirus infecting people – and most people seem to have caught the most aggressive form of it.

The team of experts from Beijing and Shanghai said 70 per cent of people have caught the most aggressive strain of the virus but that this causes such bad illness that it has struggled to spread since early January.

Areas with rudimentary medical care, such as inland China and Iran seem to be getting the worst of it, but there is a lesson in this and it is that the virus can mutate in different directions and a vaccine for one strain may not be effective against another.