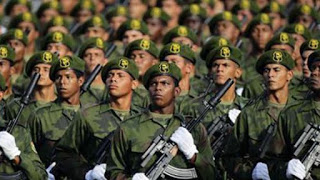 Facebook
Twitter
Pinterest
WhatsApp
Demonstrations and marches occurred through the day yesterday, May 1, but the large opposition rally that Juan Guaido called for did not materialize. There are take-away style messages that can range from “the Venezuelans don’t want freedom enough” to “the Venezuelans are starved to the point where they are unable to resist.” You can slice it any way you please. I think that both ends of the spectrum may be true.
News services said that 20 people were injured by gunshot wounds inflicted by Cuban troops, there to prop up the Maduro regime. No KIA’s were reported, though there are certain to have been a few.
The attempt to unseat the Maduro regime failed for the second day. For the second day, the armed forces remained in garrison. Maduro does not trust the armed forces enough to use them to protect his regime. Cubans are more reliable and will shoot Venezuelans. Army troops are less likely to shoot friends, relatives and neighbors.
Barack told us that the Cubans are peace loving and are friends of democracy now… yeah. Every time those blue lips moved, I heard lies, but the elite media really loved the magic inner city person, didn’t they?
Socialism/Communism – and absolute rule by tyrants provide a lesson in how easy it is to invite them in and how much trouble it is to get them out. The Founders were wise beyond measure and gave us a system that works if we can but follow the Constitution. The Progs want a living Constitution that “means whatever we want it to mean”. Bad idea.