Value in a Clown Nose

Facebook
Twitter
Pinterest
WhatsApp
Think of ISIS and of all the horrible things that they do for fun and profit: Burning people alive, drowning people in cages, beheading, selling young women as sex slaves, etc. Would they do all of that horrible stuff if they were wearing clown noses? Likely they would and it would be creepy BUT normal (non-Muslims) wouldn’t do horrible things if they wore clown noses.

EXCEPT in the case of that progressive icon, Planned Parenthood.

The ghoulish Planned Parenthood abortion doctors might not be accepted if they entered the operating room with clown noses on. But I don’t know. I do know that the people who buy the dead babies to dissect won’t care whether or not the sellers are wearing clown noses – and full clown make up or not. Such is the nature of profit over morality and human decency. Thus, the Clown Nose doesn’t always work to make things better.

If you don’t keep an emergency clown nose in your car, I think that it’s about time that you add it to your kit. If you are prone to road rage to intimidate other drivers, imagine how much more EFFECTIVE it would be if you were wearing a clown nose as you gestured obscenely and leaned on the horn. 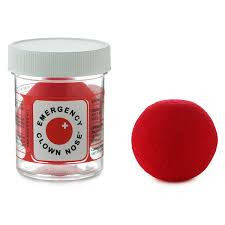 Q Are emergency clown noses for everyone?
A Yes. Just think how much more effective FBI Director James (the Cur) Comey would be to America if he appeared before Congress, wearing an Emergency Clown Nose.
Q Will other people ‘judge me’ if I’m wearing an emergency clown nose?
A I hate to break it to you, but everyone thinks that you’re a clown at this very moment, so it couldn’t hurt your position in their opinion.
Q Should I wear my Emergency Clown Nose if a police officer stops me for a traffic violation.
A That is the PERFECT time to use your Emergency Clown Nose. It also works great at court appearances. Don’t let the government intimidate you. You have rights. Extend those assertions  to the Department of Justice.  You can claim to be a taxpayer even if you don’t pay a nickel…look at Al Sharpton. He pays no tax, owes $5 million in back taxes and sleeps in the Lincoln Bedroom at the White House whenever he’s of a mind. It’s his B & B. I suspect that the secret to his success is knowing when to put on the Emergency Clown Nose. It might not work as well in a Trump Administration, but I suspect that he’ll be living in Switzerland if Trump wins the presidency.

Our fellow blogger, Juliette, is attending her mother’s wedding today in England (visit her blog). The only question in my mind is whether or not she will be forced to break out her Emergency Clown Nose to get through the day. I’m told that if you drink enough, it might look as if you are wearing your Emergency Clown Nose, even though you’re not.