In early 2012, the BLM was scheduled to auction 75 Nevada oil and gas leases covering 133,000 acres. At the last moment, however, the agency reduced the auction to 42 leases covering only 72,000 acres. According to BLM officials, these lands included sage-grouse habitat, and the bird could conceivably, one day, be considered “endangered.”

(Las Vegas Review Journal) In 1995, the U.S. Geological Survey estimated that the Chainman Shale formation in Nevada could contain as much as 383 million barrels of undiscovered oil, as well as 242 billion cubic feet of natural gas. Ten years later, using more sophisticated modeling techniques, the USGS. upgraded that estimate to 1.598 billion barrels of oil and 1.836 trillion cubic feet of natural gas.

In other words, Eastern Nevada could be sitting on one of the most energy-rich rock formations in the entire world. Around the time of the updated estimate, one oil developer told Las Vegas reporters, “You have the richest largest organic mature rock source anyplace in the world except Saudi Arabia or Kuwait. … There is no doubt, I can assure you 100 percent, you are sitting on some of the greatest wealth in this country and the world.”

However, before oil and gas developers can begin realizing this vast energy potential for Nevada, a major obstacle must be overcome: The Chainman Shale formation lies almost entirely under land controlled by the federal government. Without federal permission, these resources cannot be tapped. 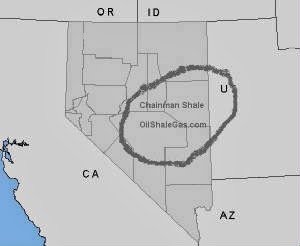 US Energy Policy under the Obama Administration has focused on green energy. The “green and clean agenda” has pushed $100 billion in public tax money to direct subsidies of wind, solar, biofuels and electric cars. Despite those efforts, renewables account for less than 3% of American consumption.
America needs a domestic energy policy that focuses on growing the economy and providing security in an uncertain and nuclear armed Middle East (thanks Barack). America now produces more oil and gas than any country in the world. We’re also number one in nuclear energy and number two in coal production. Because of the shale revolution, oil and gas output will continue to grow for the foreseeable future. Domestic consumption of gasoline and other petroleum products is falling , mainly because we continue to use fossil fuels more efficiently. At the same time, because of the greater use of natural gas for power generation and industrial boilers, greenhouse gas emissions are lower today than they were 20 years ago, even though the economy has expanded by more than half.
The US needs to develop oil fields in Nevada and elsewhere that sit under US public lands to make the nation an oil exporter. (We currently import oil from Canada and Mexico) To the extent countries like China, India and Indonesia use our gas instead of their coal to generate electricity, America is helping to fight climate change as well.
Building pipelines is the most efficient way of taking that oil produced in Nevada and elsewhere from the point of production to the point of distribution.
I don’t know why the Democratic Party fails to grasp this. I can only opine that (1) The oil exploration companies aren’t kicking back enough to the DNC (Chicago Style) (2) The railroads are flooding the DNC with money and the concerns building the pipeline are not offering enough discrete private money to key DNC faithful (Chicago Style).