For those of you who are not familiar with the island nation of Vanuatu, you may recall that the island of Espiritu Santo played a role in the Second World War as a place to stage operations from and as a home to various US Marine Corps fighter squadrons.

It’s not all that far from Guadalcanal and “The Slot”.

My first trip there took place on-duty  (in the ’80’s) and I took an Air Vanuatu flight to Port Vila. Upon landing I noticed the only other Air Vanuatu aircraft crashed and destroyed to one side of the runway. The airplane that I flew in on disappeared with all passengers and crew in the ensuing week. I was  eventually extracted by a US Navy P-3C that faked a transponder failure. But enough of my experiences. Who cares?
This week, Vanuatu pledged ‘full understanding and support’ for China’s position in the South China Sea dispute. The Chinese assert that they own the entirety of the South China Sea and they are building islands to secure their claim. China anticipates a negative outcome from international arbitration proceedings. To date Vanuatu is the only Pacific Island country out of the eight that have diplomatic relations with China to commit to China’s South China Sea position.
Vanuatu exports copra (coconut husks). Their only source of national funding is tourism and foreign aid payments from — well it’s going to be only China now — unless Hillary wins the US election. If that happens we shall deficit spend to help keep them afloat. If Trump wins, the money will likely not be poured down that rat hole. The government is hopelessly corrupt and had a love affair with the Soviets in the late 1980’s. Today that love has shifted to the Chinese and will remain so long as China pays for that love. The US has no diplomatic mission to Vanuatu (US interests are managed from New Guinea).
Bauerfield International Airport at Port Vila has a runway that is so dangerous that all flights in and out were canceled as airlines declined to fly there.  Air Vanuatu can fly there, but it needs aircraft (they go through quite a few due to crashes mid-Pacific and on landing). The government agreed to grant the national airline $3.5M. Quantus agreed to fly into Santos airport on Espiritu Santo…which remains in much the same condition as the US left it following the Second World War.
There is a British Ex-Servicemen’s Club at Port Vila. If you go there, you need to know about the club — just because you need to know it’s there.
To me, the place is a nasty bit of Pacific Island real estate with unfriendly African-Vanuatu residents who would beat you to death for your shoes. But they do want tourism dollars. 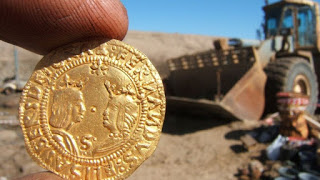 Shifting gears slightly, If I ever find a 500 year old shipwreck full of gold coins (link),  I doubt that it would make news. I would not be inclined to call a press conference. None of you would hear of me again. However a year or three later, I may reach out and fly you all my mansion in Bora Bora. (definitely NOT Vanuatu)

Prior to that, LSP may end up as parson and fishing boat captain in Bora Bora.

But who am I kidding?  Still and all, it’s the thought that counts.