Undermining the US Presidency 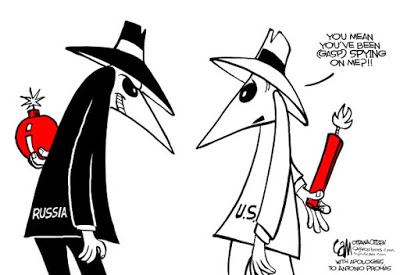 I read the unclassified version of the report released by the Directorate of National Intelligence (on behalf of CIA, FBI and NSA) in regard the effort by Russia to undermine confidence in the democratic electoral process. As I’ve stated before, I don’t have access to the data and can’t say whether it’s slanted or not. FBI and CIA (more political and pro-Obama) have high confidence that the information is correct. NSA, which deals with cyber security, has moderate confidence that the information is correct.
To put this whole thing into context, we screw with the Russians in the same way and President Obama launched the same sort of attack on the Israeli electoral process last year and the Israelis made the same sort of accusations against us that we are making against Russia.
While the press is going crazy with it — Barack has known about it for eight months and well before the election on November 8, and didn’t do anything about it. In fact, he said THIS on October 18, 2016, when President Trump expressed skepticism that the election might be rigged. My sense is that Barack wasn’t all that worried about the Russians interfering with the presidential election. After the election the tune changed HERE, because the progs thought that Hillary Clinton had been anointed by the voters…premature celebration. (h/t Race For Justice Blog – I used the video clips that he posted a week or so ago)
We’ve hashed this out on this blog before, I don’t plan to hash it out further. However, because the report came out today, I wanted to offer a few additional comments.
In Conclusion
The Russians Service will do what intelligence services do and they will work to strengthen their national hand by using active measures against other nations including the USA. The USA will do the same thing including collecting against our allies. While it’s easy to get hysterical about it, everyone does it. If the Russians won this round, we won when we hacked into them, but we won’t admit that. Move on, learn from the experience.
Barack, his administration and the corrupt, elite, mainstream media has worked to undermine the legitimacy of President Trump’s election with a lot more fervor than the Russians did. Weigh and balance it all and draw your own conclusions.

The Song Remains the Same
“When the press is gagged, liberty is besieged; but when the press assumes the liberty to lie, it discounts clemency, mocks morality, outrages humanity, breaks common law, gives impulse to violence, envy, and hate, and prolongs the reign of inordinate, unprincipled clans. At this period, 1888, those quill-drivers whose consciences are in their pockets hold high carnival. When news-dealers shout for class legislation, and decapitated reputations, headless trunks, and quivering hearts are held up before the rabble in exchange for money, place, and power, the vox populi is suffocated, individual rights are trodden under foot, and the car of the modern Inquisition rolls along the streets besmeared with blood.” – Mary Baker Eddy