Pablo and Politics (a sermonette) 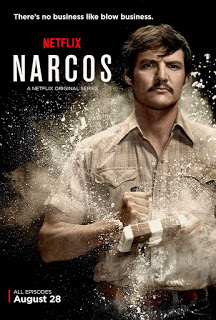 Welcome to the Sunday polemic:

The Netflix Series, NARCOS is now in its second season. It retells the life and times of Pablo Escobar, who built an empire on the drug trade. I give the series a solid 7 out of a possible 10. That means that I didn’t binge watch it, but I still watched it and found it entertaining.

There are lessons that we can learn from both Pablo and from all “bad guys” (which would include people like Hillary Clinton and her coterie of freaks and misfits) who consider themselves “anointed”.
1. They use all of the tools at their disposal.
2. They work to gain information on their opponent’s weaknesses and take efforts to exploit them for their own gain. Where some would halt or falter in destroying people, they not only do it, but they derive a great deal of satisfaction from doing it.
3. Money and power (as with cocaine) highjacks the pleasure centers of the brain. A rat will chose cocaine over food and water, it will choose cocaine over sleep, over sex, over life itself. The human brain don’t work quite the same as that of a rodent. Unless we talking cocaine, power or money.
4. If you know where a spouse works, where kids go to school or where their parents/siblings live, you can bend people to your will. Unless they are very strong willed. They have the choice to take the king’s shilling or face the consequences. History indicates that most people take the money and keep their mouths shut. With money and coercion you can buy prosecutors, judges, members of the legislature and do whatever you want to. When you own the US Justice Department as Hillary Clinton clearly did in 2016, she was automatically immunized against prosecution. Ask Seth Rich — Oh, sorry, you can’t without a gypsy crone, wearing a turban and gazing into a crystal ball, because he has a mouth full of dirt.

To round out your reading if you want to be an evil, manipulative politician or a drug lord who wants to go into politics as Pablo did, I recommend Alinsky’s Rules for Radicals as your Bible. Maybe it’s also useful to read Sun Tzu’s “Art of War” and Machievelli’s “The Prince”.

And before you leave, thinking that I am comparing the Clinton Global Initiative, and Hillary Clinton herself to Colombian drug kingpin Pablo Escobar, any similarity is only coincidental.  I don’t think that Hillary speaks Spanish.